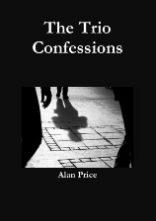 In this, his sixth poetry collection, Alan Price has taken on the task of translating nine poets. Some are well known and some more obscure, and it is a joy to read such beautiful poetry. In his illuminating introduction he tells us ‘Twenty-seven poems ( three each) by Rainer Maria Rilke, Salvatore Quasimodo, Li-Po, Ungaretti, Du-Fu, Eugenie Montale, Arthur Rimbaud, Charles Bauderlaire and Wang Wei. My interpretation of each poem is more of a personal version than a translation or transliteration’.

This is a poet demonstrating his skill and craft and taking risks. The Trio in the title alludes to a sequence of three translated poems by each poet and Price’s poetic response to each poem. There is a mathematical precision here: twenty-seven poems with each response being made up of twenty-seven words (a quatrain). But this is not simply an academic exercise; there is a refreshingly personal touch here. You feel that Price has a real love of these poets, and has sought to get to the heart, the breath of each poem and bring it vividly to life.

Rather than a literal translation, his versions are more of an evocation of spirit. Take this translation – or should that be evocation – of ‘Everybody is Alone in the Heart of the Earth‘ by Quasimodo.

This works both as a mirror image, page facing page, and also brings a deeper insight to the original poem along with the feelings and images evoked when Price was working on the translation? There is more to be translated than merely words. There is atmosphere, place, memory and emotion.

Consider this poem ‘Earth’ by the wonderful Italian poet Ungaretti.

This speaks of memory stirred by the sun on water but also of yearning and the possibility of tears. Then later in the poem we read

Memories, histories, sensuality, journeys – both external and internal – echo through the poems. We can see this in ‘Picnicking’ by Du Fu. This begins with the beautiful image of ‘sunset, a soft breeze, easy ripples, a picnic sot hidden by bamboo, lotus cool lovely by evening.’ But the poem goes on to become less harmonious as ‘a tiny dark cloud appears, and soon it’s pouring down, drenching everyone, on shore, this June collapses into autumn.’

Price responds with his own memory of a disastrous picnic.

Occasionally the version-response device doesn’t work. Sometimes the translated poems are so lovely and complete in themselves that Price’s poetic responses can be distractions; but on the whole, they deliver and compliment, and such originality must be applauded.

In the final section , the last of the ‘Trios’, Price has written a new sequence called ‘Light Testimony’. He describes it as ‘ a long confessional poem’, of three parts, which interweaves some of the poetic responses with new material. Here he touches on themes visited previously such as travelling, memory and loss, ageing and love. Although there was much to admire here, I felt this was almost a step too far. I began to feel overloaded with concept over substance. Even the title alludes to yet another idea ( light being the opposite of heavy or emotionally burdened) and references another writer ( Milan Kundera). Maybe this was Price wanting to bring everything together, but I felt the translations/interpretations and responses worked well on their own and didn’t need another section. However, this reservation is not to detract from what is essentially, a beautifully thought-out and elegant collection.