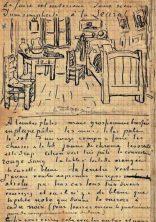 Copyright of all poems remains with the contributors. Biographical notes on contributors can be found here

SUBMISSIONS: please send up to THREE poems plus a brief bio to poetry@londongrip.co.uk
Poems should be in a SINGLE Word attachment or else included in the message body
Our submission windows are: December-January, March-April, June-July & September-October 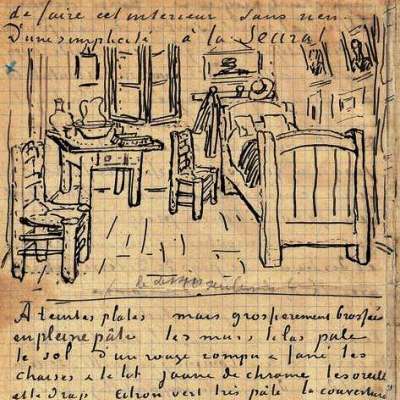 Our header illustration comes from a letter written by Vincent Van Gogh to his brother Theo and is appropriate for two reasons.  Firstly, it illustrates a poem by Neil Richards which appears at the end of this issue; but secondly the delightful compact sketch of Vincent’s narrow and cluttered room surely captures the conditions under which many of us have been living as we isolate ourselves in order to combat the threat of coronavirus.

Naturally there are references to Covid-19 in the poems which follow.  These are mostly personal responses, reflecting on mortality or lamenting loss of human contact.  But we have not let these themes dominate the issue, believing that a more varied and panoramic view would be welcome to readers living restricted lives in a time of uncertainty and anxiety.  We hope that you will agree that, broadly speaking, we have provided some diversion and perhaps a little encouragement.

Sailor and librarian, navigator and researcher, teacher and trainer, and – always – a traveler. Chris Armstrong has lived in Wales most of his life – for the last forty-five years in the country, farms and hills near Tregaron. All this – and more – has shaped the poems which reflect the joys and tragedies that life brings. He is currently working on a second collection and a novel.

William Bedford’s poetry has appeared Agenda, Encounter, The John Clare Society Journal, London Magazine, The New Statesman, Poetry Review, The Tablet, The Washington Times and many others. Red Squirrel Press published The Fen Dancing in March 2014 and The Bread Horse in October 2015. He won first prize in the 2014 London Magazine International Poetry Competition. Dempsey & Windle published Chagall’s Circus in April 2019. His latest collection, The Dancers of Colbek, was published by Two Rivers Press in January 2020

Stephen Bone’s latest pamphlet, Plainsong was published in 2018, by Indigo Dreams. A Hedgehog press ‘ Stickleback’ micro pamphlet is due in in 2020. Most recent work  published or forthcoming in Agenda ( supplement), Black Bough Poetry, Finished Creatures. Morphrog, The Frogmore Papers.

Bruce Christianson is a mathematician from New Zealand.  He lives in Hertfordshire, where he has been unsettled for more than a Gigasecond.

Gareth Culshaw lives in Wales. His second collection is out in 2020 called A Bard’s View. He is a current student at Manchester Met where he is studying for an MA in Poetry.

Tim Cunningham has had seven collections of poetry published since 2001;  his eighth, Passports, is due out in April 2020 with Revival Press.  Tim has recently returned to live in Ireland, having previously worked in education in London, Delaware and Essex.  He was awarded a Patrick Kavanagh fellowship in 2012.

Marie Dullaghan was born in Dublin. and is a retired education worker, fine arts photographer, musician, actor, writer and poet. She is a long-term member of both the Poeticians and Punch collectives in Dubai and performed regularly at events including the Emirates Airlines Festival of Literature. She hass work published in The Shop, The High Window and elsewhere

David Flynn was born in the textile mill company town of Bemis, TN.  His jobs have included newspaper reporter, magazine editor and university teacher.  He has five degrees and is both a Fulbright Senior Scholar and a Fulbright Senior Specialist with a recent grant in Indonesia.  His literary publications total more than 230.  Among the eight writing residencies he has been awarded are five at the Wurlitzer Foundation in Taos, NM, and stays in Ireland and Israel.  He spent a year in Japan as a member of the Japan Exchange and Teaching program.  He currently lives in Nashville, TN.

James Fountain was born in Hartlepool in 1979. My work been published by magazines such as London Grip, Dreamcatcher, The Journal and The Blue Nib – the latter I also review new poetry collections for. My second pamphlet The Last Stop was published by original plus press and chosen as runner up in Ilkley Literature Festival’s Best New Chapbook contest, judged by Imitiaz Dharker. I currently teach in Saudi Arabia (where I’m now locked in!)

John Freeman grew up in south London and lived in Yorkshire before settling in Wales,where he taught for many years at Cardiff University. His poems have appeared in many anthologies and magazines. His tenth collection, What Possessed Me (Worple Press), won the poetry section of the Wales Book of the Year Awards in 2017. Other recent books include Strata Smith and the Anthropocene (Knives Forks and Spoons Press), A Suite for Summer (Worple), and White Wings: New and Selected Prose Poems (Contraband Books). His poem ‘Exhibition’ won the Bridport poetry prize in 2018.

Carl Griffin is from Swansea, South Wales, and has had one book of poetry, Throat of Hawthorn, published by Indigo Dreams

Hannah Hodgson is a 22 year old poet living with a life limiting illness. She writes about Disability, Hospice use and Family Life. She has had poems published in Under the Radar, Acumen and Ink Sweat and Tears amongst others.

Margaret Hollingsworth divides her time between the U.K and Canada.  She has taught creative writing in many Canadian universities including a 10 year stint as a professor of writing at the University of Victoria.  She is best known as an award winning playwright but has concentrated on poetry in recent years.  She has published in numerous literary magazines and looks forward to the publication of her first collection at the end of this year

Hayden Hyams is a poet from Aotearoa New Zealand. He is fascinated by the sublimation of meaning through the reframing of phrases and paragraphs found in ordinary life, often sampling from Facebook, Google searches and Museum tombstones. His poetry can be found in Poetry New Zealand, Takahe and The Friday Poem. He is working on a collection of poetry named Fragments.

Teoti Jardine of Maori, Irish, and Scottish bones. He lives with his dog Amie in their Covid-19 Lockdown Bubble in Aparima/ Riverton, on beautiful southern coast of New Zealand. His poetry has often found a home with London Grip

Sonia Jarema was born in Luton to Ukrainian parents. Her poems have been published in Envoi, South, The North, Stand and Interpreter’s House as well as being commended or shortlisted in various competitions. Her novel was longlisted for Penguin Random House WriteNow program 2016. Her debut pamphlet Inside the Blue House is available from https://palewellpress.co.uk/

Richie McCaffery lives in Alnwick, Northumberland. He’s the author of two poetry pamphlets, including Spinning Plates from HappenStance Press as well as two book-length collections from Nine Arches Press, Cairn and Passport. In 2020 he’s to publish a pamphlet with Mariscat Press as well as an edited collection of academic essays on the Scottish poet Sydney Goodsir Smith (Brill / Rodopi).

Ray Miller is a Socialist, Aston Villa supporter and faithful husband. Life’s been a disappointment.

Tim Miller’s most recent books are Bone Antler Stone (High Window Press) and To the House of the Sun (S4N Books). He is online at www.wordandsilence.com.

Kate Noakes’ most recent collection is The Filthy Quiet (Parthian, 2019). She lives in London where she acts as a trustee for writer development organisation, Spread the Word. Her reviews of poetry can be read in Poetry London, Poetry Wales, The North and London Grip

Ava Patel has recently graduated from the University of Warwick with a First in an MA in Writing. She has continued to write poetry since her Degree and had some small successes being published in a webzine (the Runcible Spoon) and a magazine (South Bank Poetry).

Stuart Pickford lives in Harrogate and teaches in a local comprehensive school. He is married with three children. His second collection, Swimming with Jellyfish was published by smith|doorstop.

Neil Richards currently lives in Worcester and has been writing for around five years. He has been published in Ink Sweat and Tears, Strix, Riggwelter, Domestic Cherry and elsewhere. He has had a pamphlet published with Frosted Fire Firsts.

Selese Roche is an Irish, freelance editor living between Kildare and Amsterdam who has been writing poetry for a few years.

John Short lives in Liverpool and is a member of Liver Bards. Recently published in Envoi, Marble Poetry, The Cannon’s Mouth, Orbis and South Bank poetry he is a Pushcart Prize nominee. His full collection Those Ghosts (Beaten Track) and pamphlet Unknown Territory (Black Light Engine Room) will be out hopefully later in the year.

Jane Simpson is a poet, historian and editor based in Christchurch, New Zealand. She has taught social history and religious studies in universities in Australia and New Zealand. Her second collection, Tuning Wordsworth’s Piano (2019), and A world without maps (2016) were published by Interactive Press (Brisbane). She has recently completed a manuscript with the working title, ‘Dress rehearsal for old age’.

Barry Smith is co-ordinator of the Festival of Chichester and director of the South Downs Poetry Festival. Published in journals such as Agenda, Acumen, South and Frogmore Papers, he was runner-up in BBC Proms Poetry competition. Barry is editor of Poetry & All That Jazz. He is also a performance poet with jazz and roots musicians.

Phil Wood was born in Wales. He has worked in Education, Shipping, and a biscuit factory. His writing can be found in various publications, including: Ink Sweat and Tears, The Runcible Spoon, Allegro, Califragile.

Stella Wulff has a deep love of the natural world and a fascination for politics and the human condition—themes that she explores in her poetry. She has poems in several anthologies, including the award winning #MeToo. Placed third in the Sentinel Literary Competition, nominated for Best New Poet  Anthology 2018, her work has been widely published. Journals include: The New European, The French Literary Review, Prole, Rat’s Ass Review, Ink Sweat & Tears, and many others. She is co-editor of 4Word Press who published her pamphlet, After Eden, in 2018.

Tim Youngs is the author of the pamphlet, Touching Distance (Five Leaves, 2017) and co-editor with Sarah Jackson of the anthology, In Transit: Poems of Travel (The Emma Press, 2018). His poems have appeared in several print and online magazines, including The Interpreter’s House, Litter, Magma, Poetry Salzburg Review and Stride.