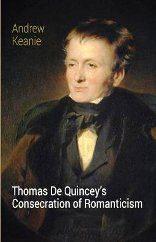 Thomas de Quincey is a curiously peripheral figure, hovering on the edges of English Romanticism, there almost as an interloper. Andrew Keanie speaks of the “curse of secondariness”, and sees him as unable, or unwilling, to free himself from the influence of Wordsworth and Coleridge. The first was to De Quincey a sort of father-figure, the latter a sort of elder brother whose genius he recognized but in whom he was readily able to detect some of his own failings of character.

He came to Wordsworth’s poetry early, writing a fan letter to him while still a teenager. When reading the Lyrical Ballads for the first time he had felt as if it was his own life he was reading about so much the poems struck home to him. When he finally came to know Wordsworth the man some of this hero-worship was abated. Certainly he couldn’t share Wordsworth’s own self-estimate. In ‘The Prelude’ Wordsworth claimed that in nature he had found for himself a “sure safeguard and defence / Against the weight of meanness, selfish cares, / Coarse manners, vulgar passions.” De Quincey thought otherwise, and said so. (Among other things Wordsworth, all too aware of social station, spurned him when he married a local farmer’s daughter.) In the texts collected as Recollections of the Lakes and the Lake Poets, which deals at length with Wordsworth and Coleridge, he has become, in Keanie’s words, “a disappointed, and indeed, embittered disciple” of both. (His Wordsworth is, for example, one “with a worldly tone of sentiment”, and a man characterized neither by generosity nor self-denial.)

Some of this is brought out by unflattering physical detail: he notices “the narrowness and droop of Wordsworth’s shoulders”, and the impression Dorothy Wordsworth gave of “sexual awkwardness”. He found he had more in common with Coleridge –and not only in being addicted to opium. He notes the “restless activity of Coleridge’s mind in chasing abstract truths, and burying himself in the dark places of human speculation”; this seemed to De Quincey “in a great measure, an attempt to escape out of his own personal wretchedness”. There is clearly an element of describing himself in this. Keanie doesn’t say (though it is clearly the case) that Coleridge does the same when he sees De Qunicey’s mind as “anxious yet dilatory, confused from over-accuracy, at once systematic and labyrinthine”. He is overtly speaking of De Quincey, but the description applies at least as much to himself. One should question the term “over-accuracy” here. Neither of the two was particularly scrupulous as to fact – this was not exactly a characteristic of Romanticism in general – but both displayed pedantic traits when rummaging through their stores of recondite knowledge.

De Quincey was, like Coleridge, an omnivorous reader, and followed similar paths through the thickets of German metaphysics, where few others in England at that time were happy to tread. He was thus equipped to discover that Coleridge was a plagiarist – inter alia that in his Biographia Literaria he had incorporated into the text passages translated from the German of the philosopher Schelling without acknowledgement and as if they his own thoughts. There is a certain hypocrisy in this: Coleridge was clearly guilty of plagiarism but so was his accuser. De Quincey’s essay ‘The Last Days of Kant’ is in fact a translation from an unacknowledged German source. Similarly with his accusation that Coleridge used opium less for medical reasons than “as a source of luxurious sensations”. It is clear that De Quincey himself used the drug for what a later generation called “tripping” – going out into the streets of London to see the city magically transfigured through the powers of laudanum.

De Quincey wrote for money. Once he had exhausted the legacy from his father, and needing to support his wife and children, and finance a taste for books, alcohol, and drugs, he became a sort of miscellaneous journalist, writing for the numerous literary and political journals of his day. Relying on a capacious (if not always accurate) memory, and on the erudition acquired in the course of pursuing his multifarious interests, with the aid (and sometimes the hindrance) of laudanum, sleeping by day, and working by night, he was, for the most part, able – particularly after his daughter had taken over her father’s chaotic finances – to keep the creditors at bay. It says much for De Quincey’s powers of mind and contradictoriness of nature that he could, despite his for the most part rabidly conservative politics, produce a treatise on the liberal economics of David Ricardo that was praised by John Stuart Mill.

But it is, of course, by the Confessions of an English Opium-Eater which appeared in 1821 that he was chiefly known in his own times and is still remembered in ours. (once it achieved fame – or notoriety – he was able to refer to himself simply as “The Opium-eater”.) De Qunicey’s style of writing tended to the ornate and the convoluted, and was often marred by facetiousness and over-lengthy digressions, but in the Confessions his faults turn into strengths. It is a voyage into the interior – and often a nightmarish one. The account of De Quincey as a schoolboy runaway, vagrant on the London streets, and befriending Anne, the girl-prostitute, is unforgettable. Wordsworth’s “spots of time” were of moments that, in recollection, brought comfort and balm to the soul, those of De Quincey, evoked by opium-dreams, could as much bring back to him otherwise forgotten terrors. If, when writing the Confessions, De Quincey revisited Soho and Oxford Street to assist his memory, he should not be regarded as an autobiographer in any straightforward sense – any more than Wordsworth was in The Prelude. The Romantics in general were happy to invent what were, in effect, useful fictions. Doubt has been cast on the actual existence of Coleridge’s Person from Porlock or the boy of Winander who appears in The Prelude, even – with less justification, one would have thought – on De Quincey’s Anne. But the issue is scarcely a crucial one: here we have mental journeys rather than ones that can be measured in miles. If Anne die not exist, someone like her must exist to fill that role.

Romanticism in general – and certainly in its Wordsworthian form – tends to promise more than it can actually deliver. Wordsworth tells us that nature “hath a power / To consecrate, if we have eyes to see / The outside of her creatures, and to breathe / Grandeur upon the very humblest face / Of human life”. But the account of how we are to be led with Wordsworth ”Through nature to the love of human kind” seems to leave us with a good many steps missing. His vision of “The feeling of life, endless, the great thought / By which we live, Infinity and God” may be inspiring but surely suffers from a certain grandiosity. He brushes away self-doubts that he may be merely “A solitary, who with vain conceits / Had been inspired, and walked about in dreams” – but that he has to do so shows a fear of whether this vision is one that can be sustained. Of Coleridge, Keanie rather tartly notes that “his genius seemed to require, if not outright vagueness, then a certain lack of traction in daylight reality”. He adds: “So did De Quincey’s.”

Yet there is no denying that De Quincey, with the Confessions, brought Romanticism into new realms. The work had an international réclame. Hector Berlioz, arch-romantic among French composers, and fellow enthusiast for opium, was inspired by an early French translation to enter into the dream- and nightmare- world of the Symphonie Fantastique. By the mid-nineteenth century Baudelaire was extolling the book’s virtues as a text for the fl?neurs of city streets. It was a harbinger of the Decadents (such as Beardsley and Wilde) who delighted in the perverse and artificial. If this is a long way from such core Romantic tenets as taking one’s bearings from nature – paradise was now artifical and could be bought at a druggist’s – De Quincey’s essay on ‘Murder Considered as one of the Fine Arts’ in its explicit amoralism takes us forward into the world of the Art for Art’s Sake movement.

Keanie is a sure-footed guide in this tricky terrain, and is free of academic jargon, though not without his idiosyncrasies – as in his enterprising employment of the verb “hornswoggle”. For anyone curious about De Quincey and ready to ponder anew the protean nature of Romanticism this is an informative and highly readable introduction.