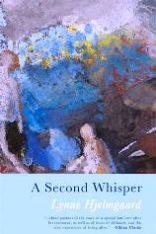 Poetry Review – A Second Whisper: Lynne Hjelmgaard’s new collection is a tribute to Dannie Abse – but Alwyn Marriage finds it is also much more than that!

An introduction to this collection describes, in tender and amusing detail, Lynne Hjelmgaard’s meeting with Dannie Abse; and the relationship that gradually developed between them surfaces in a number of the poems as well. These poems suggest the joys and challenges faced by two people, both been bereaved after long, strong marriages, subsequently experiencing the quickening of new love. The book’s title, A Second Whisper is therefore appropriate, but this collection is more than just an exploration of late love; it contains poems about Hjelmgaard’s other family relationships, her marriage, her visits to Italy, her boating experiences, and a variety of other subjects including everything from blue jeans to ladybirds.

Several of the poems are about Hjelmgaard’s own children. They can be poignant as in “Winter Gives Me” which moves, on the one hand, from ‘Winter gives me permission to shut down, / to crawl inside myself and rest’ (which is possibly an emotion most of us will recognise as an annual urge to hibernate), to doubts about her relationship with her son, and recognition of personal failings: ‘I know nothing about parental love.’

On a more positive note, she comes close to the core of maternal love, as she celebrates, walking behind her adult children, and seeing their separateness and yet continued closeness “My Children Walk Ahead”.

Hjelmgaard may have sailed across the Atlantic on at least one occasion, but I’m not sure that this adventure with Berith would appeal to many other sailors.

At the other extreme, is her highly controlled account of a tragic drowning drama in “Soper’s Hole”, which is described effectively and succinctly in sparse and simple couplets.

There are occasional non-standard phrases, such as ‘its blurry kaleidoscopic world inside of a world’; and at times there are very slight hints of Hjelmgaard’s North American background, as with the attractive American Indian word for biting midges, ‘No-see-ums’, which occurs twice. There are also some interesting and pleasing inversions of word order, such as ‘The vegetable man cracks a smile with no front teeth’ (“At Villa Borghese”). I found something enticing about that unusual and ambiguous sentence and kept returning to savour it.

Qualities that stand out in this collection include: a close and detailed observation as in “Ode to a Danish Lamp” with the poet’s response to the lamp: ‘Why do you move me so?’; and also a clear sight and complete avoidance of sentimentality, as in the unemotional approach she takes to the butchering of birds in “Death in the taverna”. There are flashes of playfulness, with a light touch and humour worthy of someone close to Dannie Abse, seen in “On Willow Road”, which also contains colourful descriptions:

Hjelmgaard’s musical ear is, perhaps, at its clearest in “The Gift”:

(Do I detect a shade of Eliot’s influence in those lovely lines?) And throughout the collection there is a careful choice of poetic form, including the controlled pace of “In Gainsborough Gardens” with its fifteen separate lines. It must have been tempting to present this in two compact stanzas, but the single lines allow a slow and contemplative approach to the scene she portrays.

Finally, in the poignant “I Can Almost Sense the Divide”, the poet’s clear, loving but unemotional voice captures the final moments of a loved one’s life. As so often in autobiographical poems, one wonders how much, if any, back story we need to know. I am not entirely sure whether the dying person here is Hjelmgaard’s husband or Dannie Abse, but I do know that the reader is taken into that hospice room, to share the poet’s uncertainty, her farewell.

So many of us loved Dannie Abse, both as a poet and as a man and I personally treasure the evening he and I, along with Rosie Bailey, shared a reading at the Poetry Society AGM on the occasion of his 90th birthday. Hjelmgaard was fortunate to be close to Dannie in his final years, and through “A Second Whisper” we can notice again, and appreciate, some of the details of his life – his Jewishness, his Welshness, his bubbling humour and his extreme generosity to other poets.

A Second Whisper celebrates a poet who was clearly known to, and loved by, the writer; but the book is definitely not just a tribute to Dannie Abse. It is a collection of worth in its own right, with a voice and register that are very different from Abse’s. Hjelmgaard’s next book is likely to be a more obvious response to Abse’s poetry; and on the strength of this collection, we can look forward to that.