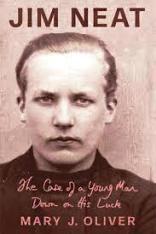 We are all migrants, to some degree – or most of us have migrant ancestry. My wife’s descended from the Huguenots, via Wales. My own great-grandfather emigrated to Canada in 1906. His first job was picking up buffalo bones from the prairie. In an age where individuals and nations have become increasingly anxious about ‘identity’, who our parents were is a source of endless fascination. Mary J. Oliver has been doing some research—a lot of research—and the result is this life of her father, Jim Neat.

The author’s characterisation of the work as a ‘long narrative poem’ is maybe a little misleading. What we’re given, in fact, is a montage of prose-poems, letters, photographs, newspaper articles and notes, which trace the story of Jim Neat’s early life, in particular his closeness to his sister, Queenie, his escape from family tensions as a stowaway to Cape Town, his subsequent journeying via Australia to Canada, his relationships and recovery from mental illness there, and his second marriage following his return to England. There are documents, too, detailing his war service in Algeria and Sicily, and several poems that explore Mary Oliver’s struggle to come to terms with his absence.

The book begins in Canada, where Jim Neat’s heart belongs. He’s ‘down on his luck’ – as the subtitle suggests – and presently an inmate of Toronto jail where he’s detained on a narcotics charge. Within two pages, though, we’re following the route that brought him to this pass, via his doctor’s case-notes and Jim’s poems, written in the Ontario hospital to which he was admitted in 1935 for psychiatric care. Like many a contemporary migrant, Jim has taken risks in his search for work, ‘riding the rods’ on freight trains, and he’s short of clothing to keep out the bitter minus temperatures.

The crossing-out is a device used frequently in Jim’s therapeutic writing. It works well to suggest a mind still processing experience and at the edges of self-loathing. From his childhood, Jim has been a fan of Joseph Conrad, the inspiration of his early voyaging, and for this he blames his elementary school teacher Miss Thomas. De profundis, he cries out against her well-meant ignition of his imagination, and against the privations it has brought him to:

At the centre of the story is the crisis that has tipped him over into what might be a severe form of depression. Its origins lie in Jim’s romantic tragedy, the loss of his soul-mate Lizbietta and their child, Mary Oliver’s Canadian half-sister, Mariya. This part of the tale is largely supplied by another ‘found’ document, Lizbietta’s diary which covers the period between April 1932, when they met in the Saskatoon bookshop where she worked, and June 1935. The diary chronicles Jim’s settlement into the Ukrainian community, and the brief period of happiness and stability he found there. The entry for ‘Sunday 25th May 1932’ is the fulcrum on which this section pivots.

It’s a tough existence, mitigated by love and the support of their friend, Adam, a black porter on the Saskatoon Railroad, and Valentyna and Viktor, Lizbietta’s adoptive parents. Jim is forced to seek work away from home, and it’s on his return from one of these trips that the tragedy strikes. Lizbietta, he discovers, has died in childbirth and his daughter has been taken into the local orphanage. In his grief, he rushes wildly to the Home for Unmarried Girls and Illegitimate Babies and is arrested and committed to a hospital for the insane.

His recovery is largely due to the kind ministrations of Donald Fletcher, the Superintendent of the Whitby Hospital in Ontario where the young Jim finally washes up. Dr Fletcher’s enlightened regime and the gentle company of another inmate, the veterinary scientist Frank Schofield, prove sufficient to bring Jim back to life – a new life in England, with his sisters and eventually with the author’s mother, Kate.

The former contains some of the most telling poems and prose-poems of the collection, which deal with her ambiguous feelings about her dad:

Among the ‘Found Documents’ there’s an ‘Exchange between my father and me’ from September 1982. In his letter to Mary, Jim explains how he chose her name – after her half- sister, Lizbietta’s lost daughter.

He goes on to tell her how proud he is of her forthcoming exhibition in Glasgow and encloses some drawings of his own. ‘What do you think? Any talent to speak of?’

The reply is five lines long, thanking him for, and praising, the drawings, and advising him to avoid darkening the pencil sketches with charcoal. The outstretched hand isn’t taken. Perhaps in this tribute, published thirty-eight years later, Mary J. Oliver has found her way of forgiving.

It’s an absorbing and thought-provoking book, and one which contains far more than there’s space to summarise here. I’m left, though, with a reservation, and it’s one that Oliver herself may have anticipated in her ‘Verdict’, the last item in the collection. This is simply a quotation from Vladimir Nabokov’s The Real Life of Sebastian Knight: ‘Remember that what you are told is really threefold: shaped by the teller, reshaped by the listener, concealed from both by the dead man of the tale.’ Oliver has declared, in both her You-tube interview and in the ‘Author’s Note’ that ‘where I found gaps in his narrative I have often augmented tantalising fragments of information with imagined details…and merged some events’ and that ‘there are a few invented figures who help move the story forward.’

As with that hybrid creature the ‘docu-drama’ you’re never quite sure where the factual documentation ends and the fiction begins. That’s not to argue that a poet can’t discover truths too deep for taint through empathy, through being there in soul and spirit, but the grey hinterland can be difficult territory. I have my doubts, for instance, about the ‘Document Enclosed in Queenie’s Letter / Bliss in Cape Town, 1921’ which purports to be a letter from a sweet fourteen year old ‘sex worker’ whom Jim encountered when he stowed away at the age of fifteen. No doubt someone will contact me to explain that, no, it’s word-for-word authentic; that’s always the way. Nevertheless, once sown, the uncertainty is there. It’s an unease that emerged again, for me, at one of the key moments in the narrative. The circumstances of Lizbietta’s death are finally revealed to Mary in a letter from Serge, Valentyna & Viktor’s son, dated 5th February 2008. The shock of the discovery of her body has caused him to become mute—for the rest of his life. His written account leaves a vivid impression, but he dates the event as happening in the drought of June 1936. According to Jim’s evidence, Lizbietta’s death occurred in ’35 and Jim was already in the Whitby Hospital by then. Old men, of course, can easily make slips with dates, even if they claim their memory is ‘excellent’. The incident is so heart-rending you wouldn’t want to make it up. The reader’s already on-side with Jim Neat. His story is compelling enough without dramatic embellishment.