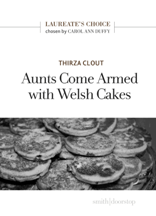 Great name for both poet – I had a great, great grandmother named Thirza a propos nothing in particular – and her pamphlet. This one is as chosen by Carol Ann Duffy for smith|doorstop, so that is some recommendation to start with, but at £7.50 for 25 pages of poems, perhaps not exactly a bargain. When did pamphlets become so expensive?

Putting aside such considerations, Clout serves up a treat of poems on her largely Welsh family relationships, both good and troubled, ‘buoyed up on the bosoms /of plentiful aunts.’ These are the same aunts who come armed with the Welsh cakes of the title, recipe included, although thankfully she leaves out the secret ingredient known and used in my family. These are interesting narratives in the sense that everyone’s family is worth writing about, each unique, mad and bad in its own way, but what really engaged me in this collection were the poems where Clout lets her sardonic wit rip.

“Girls” is inventive in its layout – right justified – and it’s content: a strident list of all the girls ‘who go beyond the pale to change the world’. I am sick of watching women die is another list poem wishing for a feminist rewriting the canon of opera and classical theatre: ‘I want Hedda to get a job and enjoy multiple orgasms’. The subject continues in the next poem,” Henrick has so much to say at book group”, that by the end of the poem the women hilariously ‘stuff his mouth with hummus’ in an effort to be heard.

The final few poems are tender in their memorial, and not without humour. “What you would not want discovered after you die” starts with the sock draw – ‘you don’t want to die wearing pop socks’ – before going on to ‘the faux leather basque/and anything else from Ann Summers/ even if the batteries are flat’, and more touchingly the box of hankies with her mother’s initials – ‘the only thing you didn’t stuff /into black plastic bin bags’. The penultimate poem is a moving one about fat shaming, where slender people sip skinny lattes and nibble pomegranate seeds in its narrowly lineated first part, while the fulsome lines of the second part belong to the fatties, ‘flesh primed to destroy the NHS’.

There are new discoveries along the way, such as the final poem, “Honey”, which speaks of honey made by birds, or in “A Present”, where the last gift from the speaker’s mother is, surprisingly, even shockingly, her death, by which she means mother did not linger, or in “All Soul’s Night” when her deceased parents stop by for tea.

This is a short collection of unadorned, clear and punchy writing. I rather enjoyed it.

Kate Noakes’ seventh and most recent collection is The Filthy Quiet (Parthian, 2019). Her first book of non-fiction, Real Hay on Wye, will be published by Seren in 2020. She lives in London.