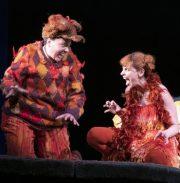 The most accessible and refreshing is The Cunning Little Vixen (premiered in 1924), with its comic acceptance – like late Shakespeare – of the redemptive power of love and renewal, and its tragic awareness of the forces of raw nature and of life’s disappointments.

Its celebration of the wild world, inspired by a newspaper comic strip, is seen as an expression of Janacek’s new-found excitement in animal forces stirred by his obsession with the young, married woman Kamila Stosslova, 38 years his junior, with whom he conducted a passionate correspondence running to more than 700 letters.

It’s also the most relevant to our times, when anxiety about man’s destructive relationship with nature is running high.

A line describing a starving vixen condemned for stealing a chicken from a man “stuffed with food” has contemporary resonance as not so much a statement about the need for social justice between humans as for equitable sharing of the planet’s resources.

The Welsh National Opera, under David Pountney, has made a major contribution to placing Janacek at the heart of the repertoire.  Its Janacek productions began in 1970s and 1980s and this version of the Vixen dates from those times.

It’s a fecund mix of opera, drama and balletic roles for a sub-cast of creatures led by the elegant dragonfly (Stefanos Dimoulas), flitting and pirouetting over the grassy mounds of Maria Bjornson’s set.

Both the original and the translation have endured and the strength of Aoife Miskelly’s charismatic Vixen overcomes any “Me Too” squeamishness we might feel about the sexual smuttiness and double-entendre.

Lithe, mischievous and limpid-voiced, Miskelly bridges the human and natural worlds.  One of the richest scenes is her coming of age when she flirts and falls in love with Lucia Cervoni  as the lusty fox, a part Janacek wrote for soprano.

Mostly, the natural kingdom is characterised by feminine wiles and contempt for male strictures: the heroic Vixen evicts the starchy Badger (Laurence Cole) by emitting her foxy smell in his set.

Less triumphant are the encounters with the repressive world of mankind, where the only female roles – the Forester’s and Innkeeper’s wives (Kezia Bienik and Sarah Pope respectively) are passive.

The human male roles are full of character, but also of melancholy and regret.  From the rich, bass-voiced Parson (Wojtek Gierlach) to the pedantic Schoolmaster (Peter van Hulle) to the sleazy Poacher (David Stout), all are defined by their more or less requited passions for women they love and distrust in almost equal measure.

Miskelly’s Vixen in bold and amoral.  She kills the pompous Cock of the roost (Michael Clifton-Thomson) and then the hens who refuse to join her sisterhood.

Her defiance eventually ends with a single shot from the Poacher, who turns her into a muff for his new wife.

It could be high tragedy.  Instead, the Vixen’s death is almost unmarked, musically and dramatically, and life goes on as the Forester (Claudio Otelli) considers the ongoing cycle of life, accompanied by trademark brass orchestration in a scene played at Janacek’s funeral at his own request.