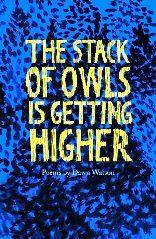 Maria C. McCarthy is both entertained and puzzled by the poems in a debut collection by Dawn Watson

I chose this attractive pamphlet of fifteen poems to review because of its intriguing title. Why a ‘stack of owls’? More on this later.

This is Dawn Watson’s debut pamphlet, and the settings vary from Georgia, Tennessee and the Carolinas to the poet’s native Belfast. Rivers and heat feature strongly, creating an atmosphere of languid water, stillness, decay, and mystery. Startling use of strong verbs is evident, such as ‘Cypress plumb / the banks of the Ogeechee’, and ‘The clumped hanging moss is tickled / at the memory. The pitchfork shivers.’ (“How To Kill Snakes with a Slipper”).

Dawn Watson uses a range of forms and shapes of poem: some look like sonnets (or near-sonnets) on the page, but do not follow a classic sonnet’s scheme. This poet goes her own way. Some poems are long, one right-justified on the page, another with lines so long that it is printed in landscape (“The M1 to Belfast”).

“Chicken Wings” is a concrete poem; a prose poem, in fact, as it appears that the words have been poured into the column at the centre of the page. The poem begins with a God ‘described as a bar / of horizontal light’ and moves onto the subject of chicken wings. The poem is packed with sensory details, abstract concepts of God and light transmuted into ‘solid, angular radiance’. This phrase is repeated towards the end and applied to an idea of how chicken wings might be served, also as a horizontal bar, ‘moulded stiff with celery, sauce and dip.’

Watson’s juxtaposition of the realistic and metaphorical is ever- surprising. In “Don’t Shoot, Sir”, there is a threatening situation of being stopped by the police for a traffic violation, which slips into the surreal. In other poems, unreality pervades throughout, as in “Peach Season”. A woman leaves her wife and son to pick peaches, and disappears from their lives. As in many of Watson’s poems, the reader is made to work hard to divine meaning. There are extraordinary images: ‘One night / she tucked / her wild legs beneath her and unscrewed them at the hip.’ I must confess to being baffled by some of these, such as ‘After a year, they scanned the fresh-cut field / for a rare sight / of dolphins.’

Interspersed are more accessible poems, such as “Advice for Campers”, and the devastating “Non-Biological Motherhood in Euclidean Terms”, which has a GP general manager saying, ‘Non-biological mothers from same-sex couple / are not equal to biological mothers / in emergency situations’.

A favourite poem for this reader is “We Can Chat About It by Teletext Which I know Is Impossible”. This imagines using a defunct technology to work slowly and painfully through an imagined conversation with an ex-lover. It unfolds beautifully, working towards the questions, ‘are you happy? / Are you glad we’re not friends?’

As for the title, ‘The stack of owls is getting higher’ appears as a stand-alone line in “Yellow Punkins on the Ooleney”, bearing no relation to any other part of the poem. After reading it several times, unlike the legendary wisdom of owls, I am none the wiser as to its meaning.

This short collection showcases a huge range of skills and topics, but most of all, Dawn Watson’s powerful imagination and slanted world view. I would hope to see a full collection, perhaps on a unified theme.