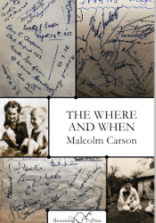 Malcom Carson’s latest collection takes its title from a poem about autograph books being valued more for the memories they evoke than for the names they contain:

It is also an apt description of his poetry, which is usually rooted very specifically in time and place. The “where” of these poems includes Lincolnshire, where he was born, and Cumbria, where he now lives, while also taking in holidays on Skye and travels to The Czech Republic, Montenegro, Nepal and India, some of them revisiting scenes from his earlier books. The “when” might be Anglo-Saxon times, or the present, or memories of childhood, which remain a favourite.

There are poems on literary themes, too, including more of his “Edgar” poems. “The Owl and George Macbeth” describes waking with a memory of Macbeth’s poem “Owl”, but being unable to remember what the poet was called, until the cry of a tawny owl outside brings with it ‘the fat mouse of his name’. “Ellman’s Joyce” has the poet wanting to tell his long-dead mother that he has finally got round to reading her copy of the book, while one of the more energized poems in the book, “Not that Godric”, takes a line from the Anglo-Saxon poem, “The Battle of Maldon”, to create a cut-down version of the epic, even beginning with an ellipsis like the surviving fragment of the original. Carson’s short poem centres on the fact that two of the characters in the poem share the same name: the cowardly Godric, son of Odda, who flees the battle on his dead chieftain’s horse, leading others to retreat, thinking that Byrhtnoth himself is leaving the field; and the brave Godric, son of Athelgar, with whose heroic death the poem as we have it ends. The last line of the original is a gloss: ‘But that was not the Godric who had fled.’ Carson’s ‘… no shame // in his name who followed // his lord …’ is intentionally ironic, given the name’s dual ownership.

The significance of names forms the basis of other poems in the collection. “Lincolnshire Orchids” is about someone who thinks that tufted vetch and Himalayan balsam in a Lincolnshire park are both kinds of orchid:

‘What’s in a name?’ the poem says, although these days we ought probably to be suspicious of ‘alternative facts’. Another poem, “The Croft”, turns on the point that what many of us take to be a building is actually an area of land, which may or may not have a crofter’s cottage on it. It’s probably just a coincidence that this poem, too, ends with orchids:

More general problems of communication appear in Carson’s poems about personal relationships. “A Rural Symposium” amusingly presents a conversation between two old farmers in a pub, in which silence is punctuated by the intermittent utterance of the single word, ‘Aye’, although the point here is not so much that they can’t communicate as that they don’t need to:

“The Toby Jugs” tells of a woman coming to collect a set of Toby jugs following the death of the poet’s mother, after which she disappears from their lives:

The fact that the woman’s relationship to the poet isn’t explicitly stated reinforces the estrangement.

“For the Best” is about a man passively accepting his wife’s suggestion that they sleep in separate rooms:

After that, it comes as no surprise to read about “The Man who Married a Rock”, although on a more positive note, there is a charming poem, “Deuce”, about the attraction of opposites, in which a quiet man marries a much more outgoing woman: ‘while she exulted / he dully, duly was delighted’.

Landscapes and nature prompt Carson’s most figurative writing (‘young [newts] / like apostrophes in time’, ‘the skylark in a haze of song’, ‘the sky screaming / its unfamiliarity’, ‘buttressed flanks’). Any contemporary Cumbrian poet writing about landscape is likely to evoke comparison with Norman Nicholson, although for me the poet whom The When and Where most brings to mind is Hardy, a noticer of small things and describer of situations, such as the one in “Good Husbandry”, which puns on an old man setting bulbs in his garden, reflecting on the fact that they’ll benefit from a hard frost, whereas he and his wife must endure their frosty relationship. Unlike Hardy (and Nicholson), Carson doesn’t make use of traditional forms, but he does favour a plain style and, like Hardy, he has his quirks, in this case a slight weakness for old-fashioned or even archaic words (‘unwonted’, ‘vicissitudes’, ‘fare’ as a verb, ‘rime’ and ‘moil’, even ‘mind’s / happier perambulations’) and while ‘gelt’ is fine when the River Gelt or Danegelt is being referred to, it jarred for me, when used twice in “The Old Byre Gallery”. The purpose is to draw a parallel between the old and new uses of the building to make a living, but its oddness rather labours the point and it seems a curiously Germanic word to use for a poem set on the Isle of Skye.

Carson lets himself go, when a chance remark by a Grimsby chip-shop owner that she had been on holiday ‘down south’ and more specifically ‘All the way’ leads him to riff on a journey not to the south coast of England, but to the South Pole, caravanning over:

the details presumably courtesy of Sir Ranulph Fiennes, who receives an acknowledgement along with Marklew’s fish shop.

The book as a whole is notable for its clarity and consistency. Carson has a good ear for rhythm and cadence and the poems have the calm assurance of a poet who has found his own voice and is comfortable in his own style, one that fits well with the ‘equable domesticity’ he alludes to in “A Kitchen Visit”.

Not that Carson confines himself to domestic themes: there are poems here that take on the super-rich (“The Boat”), tourism (“easyPrague”) and climate change (“The Glacier”), while “Edgar Regards the Politicians” beautifully describes our current crop of populist chancers. This is one of five poems threaded through the book in which Carson takes as his alter ego the character of Edgar from King Lear — particularly appropriate, you think, given our own troubled times, when the wrong people seem to be in power, but Edgar appeared as far back as Carson’s first collection, Breccia (2007). There and in Carson’s two subsequent books, he represents a more personal feeling of alienation — a figure on the margins, quite literally given the littoral settings in which Carson often presents him. What one can say is that the character has gained wider resonance with time. The final poem in the book, “Edgar Revisits the Shore”, has him contemplating the continued need for his own alter ego, poor Tom:

We can only hope that sanity will be restored, but it would be a pity to say goodbye to Carson’s Edgar. Though the pieces work best when he uses less of the mock antique and, as Edgar says, ‘allows me to speak in language / I couldn’t know’, they are nevertheless enjoyable poems in this very enjoyable book.