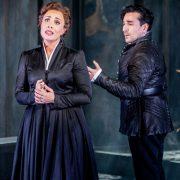 Don Carlo – or Don Carlos – in history was the mentally unstable son of Philip II of Spain whose brief betrothal to the woman his father later married and contacts with Protestant rebels in the Low Countries provided ammunition for the “black legend” propaganda whipped up by the opponents of his father’s rule.

In turn, Friedrich Schiller seized on the distortions to explore the truth that “the whole history of the world is a perpetually recurring struggle between liberty and the lust for power and possession,” as he put it in his History of the Revolt of the Netherlands.

For Verdi, the complex, historical battle of right and wrong was ideal material for political operatic drama and under Jo Davies’ fearlessly lucid direction, the dark, difficult subject-matter is dramatically and musically coherent.

It is also highly relevant as Philip II’s struggles with religious non-conformity find parallels in the contemporary fear of Islamic terrorism as a threat to the status quo.

Even the length of Verdi’s longest opera becomes effortless with a 90-minute picnic break in the grounds of an estate Bamber Gascoigne unexpectedly inherited and then agreed could provide a new home for Wasfi Kani’s unstoppable Grange Park Opera.

Leslie Travers’ atmospheric set of reflected candle-light and austere walls that serve as monastic and prison cells alike underlines the sinister hierarchy that looms over the action: God is supposedly at the top, then the Church and the Grand Inquisitor and beneath that the King. At first gentle and twinkling, the candles will grow into the infernos of the Inquisition and the fires of hell.

The drama, meanwhile, builds from haunting orchestral chords through duets and trios that showcase the vocal strength of the leading voices to the entry of Clive Bayley’s profound, gruff Philip, tyrannical and tortured.

One of the most powerful scenes is his confrontation with the Grand Inquisitor (Branislav Jatic) that provides a convincing insight into the awkward intimacy of a meeting between potentates. As all power is relative, Bayley’s isolated Philip commands our sympathy for all our moral disapproval. In his deep, tragic bass, he implores in vain with the one man in the world with the authority to thwart his wishes.

He is pleading for his son and for Rodrigo, friend to both the king and his son.

The stirring emotionalism of the opera rises a notch higher with the final parting between Brett Polegato ‘s Rodrigo and Leonardo Capalbo’s Don Carlos. Willingly we suspend our disbelief as Rodrigo dies in fabulous voice, delivering music with simple direct appeal as he reaches through the bars to the imprisoned Carlos.

Carlos is about to be released for another agonising farewell to Marina Costa-Jackson as Elisabeth, his step-mother and the love of his life. They momentarily find the peace all the opera’s characters crave in a dream of earthly freedom greater than merely personal love.

There is an argument for ending the opera with their transcendent duet before the nerve-jangling horror of the ending but given the ongoing conflicts of human history, that would be as inaccurate on a poetic level as the “black legend” propaganda was cavalier with the literal truth.