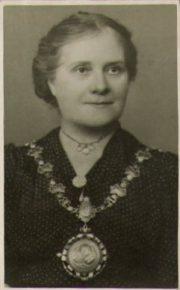 Nellie Cressall on The Isle of Dogs
Part 2.
Jane McChrystal.
Link to Part 1.

At the end of part one of this article, we saw the arrival of Nellie Cressall on the Isle of Dogs.  The move took place in 1923, two years after her heroic stand during the Poplar Rates Rebellion, and signalled a new phase in her life as an activist, as well as radical changes in her domestic circumstances.

Fifteen Macquarie Way on The Chapel House Estate would become her home for the next fifty years.  Previously, “home” had consisted of one cramped accommodation after another in the East End, made up of two rooms lacking both running water and sanitation.  Although she declared herself content with these arrangements, Fifteen Macquarie Way must have transformed the lives of Nellie and her family.

They now had a whole two storey house to themselves.  The upper floor provided separate sleeping quarters and a bathroom with a fixed bath in place and a gas supply to heat water for it.  There would be no more boiling water on the range to fill a tin bath or visits to the municipal bathing facilities.

Downstairs, the back room with a coal-fired range would have formed the centre of family life and activity.  The scullery attached was Nellie’s domain, where she did the weekly wash every Monday.  While this was an exhausting task, which involved heating gallons of water in a contraption known as a “copper”, and then washing, rinsing and wringing everything by hand, the direct supply of running water to the house must have eased the labour entailed in keeping the family clean and presentable to some extent.

The second room at the front of the house was the place for knick-knacks, the good furniture, pictures, rugs and maybe even a piano, where Nellie, her family and friends could gather for sing-songs and celebrations.

A large back garden gave the children their own space to play in and Nellie somewhere to hang all that washing.  In her previous dwellings, Nellie would have stepped straight out from her front door onto the pavement, whereas Fifteen Macquarie Way was divided from the road by a decent expanse of green guarded by a picket fence.  Number Fifteen was the end of a terrace of four houses.

The Chapel House Estate was constructed between 1920-23 along garden city lines, with a layout designed by Harley Hackford, Poplar Council’s Engineer and Surveyor.  Houses were arranged in small groups set out along curving roads to provide their new residents with a salubrious environment they could only have dreamt of in their tightly-packed, sooty terraces and tenements.

Each house was built of traditional material and ornamental details, such as the brickwork surrounding the first storey window frames based on the neo-Georgian town house, were applied by the architect, Sir Frank Barnes.  This style was an unusual choice at a time when other architects tended to employ the model of the rural cottage in the design of garden cities like Welwyn and Letchworth.

This upturn in Nellie’s domestic circumstances coincided with her graduation from rates rebel to seasoned campaigner on behalf of the people of Poplar, a position rewarded with mayoralty of the borough in 1943.

In 1945 she was invited to take her place on the national stage as a member of the British Lord Chancellor’s Divorce Committee, set up to investigate the reasons for a dramatic increase in the nation’s divorce rate towards the end of the Second World War.

A contemporary news-cutting, headed “Motherly Advice” is illustrated with a picture of a police constable showing Nellie the way to a meeting in Westminster.  The report that goes with it describes her as a “63 year- old housewife of Poplar, poor area of London’s East End, who brought up a family of seven on £1/2/6 (£1, 12 and a half pence)” and not only manages to erase her identity as a political activist  but also get the size of her family wrong.  Some things never change.

A speech she made at the Labour Party National Conference at Scarborough in 1951 was nominated by the finest made at the event by Aneurin Bevan.  She took the opportunity to praise the radical improvement made to ordinary people’s standard of living since The First World War and deliver a gentle rebuke to younger couples who came and complained to her about the price of electricity and being housed in shared accommodation.

The Island History Trust holds photographs of Nellie attending local pageants, meeting her old friend Clement Attlee and going to Buckingham Palace to meet Queen Elizabeth with a local scout troupe.  In 1959 she was made a Freeman of Poplar in honour of her long service to the borough.  Naturally her appearance alters with age, but over the years her calm, watchful expression remains the same.

After the move to the Isle of Dogs Nellie’s family grew to eight children.  George died in 1951 but she carried on with life as an activist well into her old age.  She died in 1973 when she was 90 under the care of one of her many grandchildren.

She is commemorated in the London Borough of Tower Hamlets by the street named after her “Nellie Cressall Way” in Bow.

On a glorious morning in May I set off across the Westferry Road to track down Nellie Cressall’s former home on the Chapel House Estate.  It’s still there and easily recognisable from photographs taken when she lived there.  Macquarie Way’s houses were built to last.  Designation as a Conservation Area has ensured the preservation of the layout of the streets and prevented developers from constructing anything which would alter the residents’ views from their homes.

Macquarie Way today is even greener than it was when Nellie and her family moved there.  The trees on the street are enormous.  Looking over fences and boundary walls you see gardens filled with shrubs, bushes and even more trees.  Small brown birds are everywhere.

It’s quiet, but busy.  Super-market vans are making home deliveries and tradesmen refurbishing houses inside and out.  Women, who look as if they’re on their way to one of the Isle’s many Pilates classes, are out and about.  A young male Goth, whose black garments are topped off with an embroidered, satin kimono, passes by.

But a lot has changed.  Number fifteen’s front garden is rather unkempt with tall grass and plentiful weeds, though the house still looks in good nick.  This kind of minor neglect is typical of those front gardens which have not been paved over to provide off-street parking, although in one property a resident seems to have been fly tipping on their own patch.

For many years after the construction of the estate the council would have insisted that residents keep the facades and fences completely uniform, right down to the colour of the front door.  Once they started to buy their houses in the 1980’s, under Margaret Thatcher’s Right to Buy scheme, variations were bound to start appearing on Macquarie Way.

Houses without drives are divided from the street by a variety of walls and fences.  House with drives have undergone further modifications, such as the addition of a Georgian-style porch complete with pediment, which would not look out of place in Sunningdale.

But the most dramatic consequence of the Right to Buy scheme is revealed by an internet search of recent property sales in the area.  Last year a house in Macquarie way was sold for £900,000.  What on earth would Nellie have made of that?

You can see more about Nellie Cressall’s life and work at: islandhistory.wordpress.com/2017/10/11/nellie-frances-cressall/ on Mick Lemmerman’s treasure trove of blog posts: Isle of Dogs Past Life Past Lives

There is more information about the history of the Chapel House Estate in Tower Hamlets’ guides to the management of its conservation areas at: