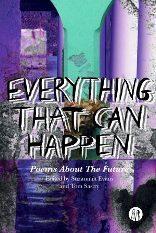 Everything that can happen

In Everything That Can Happen, an impressive cadre of talented, modern poets wrestle with the unruly subject of time and, more particularly, the future and its portents. Editors Suzannah Evans and Tom Sastry have given their contributors an ambitious and complex assignment. Happily, those contributors were well chosen and they have come through. Brilliantly.

What is it about time, anyway? Its mysteries are legion and seemingly insoluble, yet paradoxically it is also as every-day to us as is water to the mostly unquestioning (and uncomprehending) fish. Philosophers and physicists can’t even agree on whether time flows and, if so, whether it flows in one direction toward the future. Cambridge philosopher Huw Price—quoted recently in the New Scientist—has confidently stated that “[t]he idea that time can in some meaningful sense be said to flow [is] just a complete non-starter.”

To stay with the aqueous metaphor for just a little longer, for many of us time and (perforce) the future are almost impermeable to rational understanding; they remain, er…, unfathomable.

Literary types too have, across the ages, struggled gamely to make sense of—to come to grips with—time and its, perhaps, illusory linear trajectory. While central to his cosmology, Blake treated time, and the clocks we build to measure it, with deep suspicion. “The hours of folly are measur’d by the clock, but of wisdom: no clock can measure” he told us in The Marriage of Heaven and Hell. And as Northrop Frye observed in his Fearful Symmetry: A Study of William Blake, “[Time’s] only possible symbol, not only for Blake but even for those who believe in it, is the chain, which is also a symbol of slavery.” Ominous words those, set down as they were in 1947. Even Frye could hardly have then imagined, one suspects, the dumbing-down tyranny that is now exerted by the clock in our frenzied, modern world where, as this reviewer has commented elsewhere [ “Virigina Woolf and Pete Seeger, Inter Alios: A Meandering Rant on Truth, Beauty, Love and Twitter.” Mulberry Fork Review,  September 2014]

So how then have these modern poets, with their editors’ helpful assistance, approached the troubled subject of time and, most particularly, the future? While the words that introduce each of the edited volume’s four sections are often tantalisingly provocative, the poets have (thank God) mostly gone their own ways and not taken their cues from obscure prefatory declamations such as:

If there is a tilt to be discerned in the poems gathered up in Everything That Can Happen, it is one that inclines generally toward the dystopian. You won’t find much Pollyanna optimism in this writing, originating as it does from within the crucible in which we all now live—a crucible defined by, inter alia, the steady retreat of human civility, increasing populist distrust and scapegoating of “the other,” the inexorable one-percenting of economies the world over and, yes, the increasing use by some publishers of algorithms to assess the commercial viability of the manuscripts that come in over their transoms.

Climate change and its ravages come up for mention regularly in this anthology, as readers would likely expect. One of the best examples is found in Ilse Pedler’s dazzling poem, “Flood Defences,” in which laughable attempts are made by a local authority to adapt to the repeated flooding of a cricket ground as the Severn “bursts its banks for the fourth time that year.” Technology, that pathetic modern repository of naïve hope, swaggers in with its “hi-tec polycarbon” drainage system components—resembling hair plugs implanted in the cricket pitch’s grassy scalp, apparently—which the manufacturer claims “can drain 18,000 mm/hour.” But the polycarbon hair plugs are no match for Nature spurned:

To a similar effect is the gallows humour of “To the End of the End of the Pier Show” by Emma Simon. In this poem, all comers are summoned by the voice of a carnival barker to witness the creeping and unstoppable encroachment of the sea upon a seaside village. ‘Yes, we have stood by, watched struts / that held up Yarmouth’s ice-cream shops erode, / waved goodbye to penny slot telescopes / sloshed away in last year’s high spring tide’ the barker cries out. Then, with sick-making mercantile optimism, he adds:

Matthew Haigh’s “Death Magazine” reads like a promotional brochure for a pre-Apocalypse self-help guide, detailing helpful content such as ‘…6 essential tips for transferring your consciousness to the cloud’ and useful ways of ‘…preparing for life without orgasm.’

It will take more and more caustic drollery of this kind just to get us through, one suspects, until the penny finally drops and governmental policymakers come at last to their senses.

One short poem by Peter Twose warrants reproduction in full in this review. It is entitled, simply, “Dad.” The poem should be compulsory reading for those gormless high priests of technology who now insist that robotic humanoids—their hard little heads bursting with AI—can and will increasingly serve as future caregivers for seniors as they become more dependent. [For instance, New Hampshire-based Waypoint Robotics – without a trace of irony – muses on its website: “Imagine a world in which our senior citizen population is taken care of not by humans, but by fully functional autonomous mobile robots… Rest assured, this world in which robotic caregivers are looked upon to help with our world’s greying population is very much a reality. It’s not a question of if, but when.”]

Now there’s a poem that is skilfully wrought so as to work its way under the skin of an unalloyed and bona fide human, don’t you think?

Space limitations being what they are in reviews of poetry anthologies, one simply cannot quote directly here from all of the poems that one would like to highlight. But beyond those already noted, it should be recorded that there are outstanding entries here from Rishi Dastidar, Jo Young, Charlotte Eichler and Kerry Priest (to mention just a few more).

To sum up, then, editors Evans and Sastry have served their readers very well indeed in bringing out this timely (forgive me!) anthology. The same can be said of The Emma Press, a publishing house that was already deserving of commendation in this reviewer’s eyes for its prescience in having brought out Stephen Sexton’s brilliant first chapbook, Oils. Everything That Can Happen principally comprises a dystopian selection of poems, yes, but its content is cleverly laconic and deeply insightful. Wherever would we be without small, literary presses (where hearts and minds—and not algorithms, analytics and business plans—still carry the day)?

And as to that unruly horse, time? Well. Perhaps—given the dark place toward which most of the poets featured in this anthology sense we’re all galloping—we should be thankful that, as the Cambridge philosopher quoted at the beginning of this review claims, “[t]he idea that time can in some meaningful sense be said to flow [is] just a complete non-starter.” In other words, there may be some non-linear time yet (as Pollyanna might say) for us to get this all sorted—before we have to just throw up our hands and upload our consciousnesses to the cloud.