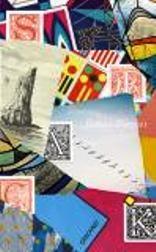 stack – a ‘series of minimalist interventions’ by Manchester-based poet James Davies and his first collection with Carcanet – is a disorientating read.

The best way to approach stack is to describe it literally. The collection consists of 108 pages identical looking pages. Each page has nine ‘interventions’ – usually a line of text, sometimes two. These lines are each exactly two centimetres apart.

They could be description of an action, or an object, or a series of objects. They could make very little sense at all. Some are literally visual, playing around with punctuation and spacing. Is this one poem, or hundreds?

Then there are the objects themselves: frequently mundane, or absurd, often household items like plugs and tape or more simply still receptacles like tubs and bags. Things are often inside other things:

And at times we are left with only shapes, numbers and colours:

The interventions feed into one another. Certain images, grammatical tricks or phrases stack up. Prepositions like ‘near’ and ‘with’ act like a kind of glue which, of course, they are:

The effects are various and contradictory. Despite being as far from a personal lyric ‘I’ as you can imagine, Davies creates a strange intimacy through the repetition of simple, first-person actions (‘i did something on a desk’). You feel like you’ve been caught watching someone.

We are a long way from pastoral idylls here, too. Repeated mentions of litter conjure up an atmosphere of suburban seediness, while hinting at a sort of poetic democracy: tubs, plugs and bags are all treated the same as the sun and the moon, birds and crickets:

Yet that last line hints towards vast infinities of nature: birds, crickets, the leaves of whatever vegetation the swallows and crickets are in, even the German poet Rainer Maria Rilke’s epitaph… Rose, oh pure contradiction, delight of being no one’s sleep under so many lids.

Knowing Davies, the lids could be yoghurt pot tops. There’s a kind of subversive pleasure in not knowing – or caring – which.

I read the whole thing in two chunks, which seemed as good a way as any. The ‘stack’ sped up toward the end, and as I raced through apparently unconnected images coalesced into vague sensations of place and narrative.

This sense of pace, the ease of consumption, stands in interesting contrast with the blurb which offers an invitation ‘to linger, to dally’ and ‘a welcome curative for our rapid-fire world’.

I began to find I had my own favourite interventions and looked forward to when they returned in new variations and contexts. The warm glow of recognition was like the feeling of familiarity you get from a phone notification, or a slot machine, more evidence that this isn’t exactly the ‘curative’ it was billed as. I particularly liked the variations on:

The line can also be read as an echo of Wallace Stevens, one of Davies’ minimalist forerunners, whose poems include ‘The Snowman’ and ‘The Man with the Blue Guitar’. There is a phrase in ‘The Man with the Blue Guitar’ which seems to get to the heart of what’s best about this poem/s: ‘How should you walk in that space and know / Nothing of the madness of space, / Nothing of its jocular procreations?’

Minimalism has never been mainstream in British poetry: most of the influences mentioned on the blurb of the collection are American poets. I suspect we have a kind of national prejudice in favour of straight-forward meanings, real people and dense soundscapes (think Beowulf). Our loss, perhaps.