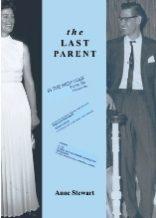 The last parent is the second to die. Anne Stewart has published a remarkable sequence of thirty poems, focusing on the clearing-up work after her father’s death, as part of a larger collection. There are some very fine pieces in the first half of the book, about the loneliness of women walking home at night and the emergence of frightening figures from the past. She is conscious ‘that the meter must run out of shillings sometime’ (death again), but she can also be wickedly funny, as in “Winter Break”

The title pun works very well and Stewart is good at conveying the situation’s dark humour. There is more humour of this kind in the second half of the book, which is mainly about paperwork and administration. Many poets have written about their grief when a parent dies, but this poet can’t allow herself to be overwhelmed by grief as there are too many necessary, dreary, trivial jobs to be done. “Become Psychotic” demonstrates the point:

So, the bereaved daughter keeps busy. She applies for a death certificate, informs distant relatives, organizes the funeral, clears the house of assorted rubbish like ‘archaic radios and TVs’, tells the bank he’s dead, fills in forms, is depressed by the letters addressed to the deceased person which keep coming in. There is a splendid poem, “Remembering the Cut”, in which she is having a normal conversation with the hairdresser and all the time thinking about her loss. And while all this is going on she’s remembering her mother’s earlier death and having disturbing dreams in which her parents reappear. It’s familiar territory, but not described often enough. I’m sure the “Last Parent” sequence will be helpful to others in the same situation, but more important still, it works as poetry.