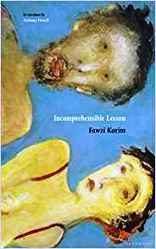 Incomprehensible Lesson is the second selection of work by the Iraqi poet Fawzi Karim to be published by Carcanet. Like its predecessor, Plague Lands, which was a PBS Recommended Translation in 2011, it has been admirably translated into English by Anthony Howell, a fine poet in his own right. In his moving and informative introduction, Karim gives a brief account of his ars poetica and enough biographical information for the reader new to his work to find a way into it. Born in Baghdad in 1945, Karim has been resident in London since 1978. Essentially, Incomprehensible Lesson is an exploration of the theme of exile, profound, nuanced and rooted in authentic experience. However, it would seem that prior to his departure from Iraq, Karim was already subject to an overriding sense of ‘homelessness’, particularly as a poet. Summarising some of the main trends that have shaped contemporary Arabic poetry, he is critical, on the one hand, of state-sponsored ‘star poets’ and, on the other, of the vacuousness of those fashionable critics and poets who mimic Western models. Karim is too subtle a poet to assume the role of prophet. Here he is in his Introduction:

Unsurprisingly then, the collection opens with ‘In the Shadow of Gilgamesh’, a long poem of eight pages in which Karim establishes a mythical backdrop to his own experience of exile, taking as his point of departure an ancient Sumerian epic that predates Homer by more than a thousand years: a work that is pre-Islamic and rooted in a prehistoric dream time.

Its opening lines evoke the poet’s beloved Tigris and the timeless rituals of settlement and survival:

It’s a world in which there is harmony between man and his environment, or to employ a more contemporary term, a world where life is ‘sustainable’: ‘And the fish rise now / as if they were the echo of his call’. It’s a vision that stands in marked contrast to the nightmare of Iraq’s recent history. Further on, a different contrast is drawn, between the sordid actuality of ‘The steps of a whore who visits / in the middle of some night’ and the otherworldly vision of a poet who attempts to ‘capture Ishtar in his poem’s mesh, / trawling for her in the depths’.

Elsewhere in the poem, we are transported from the dream time into a more recognizably contemporary world, where we catch sight of ‘the wounded / stumbling through fields of corpses … the look of the fugitive seeking out exile …. The shock of the poet detained,’ until the lines become even more explicitly autobiographical:

It would seem to be implied, given the poem’s mythical context, that violence and trauma have always been, and always will be, a part of the human condition and that, moreover, the exile of this poet, like that of Ovid, Dante, and many others, is not merely personal but has acquired the status of an archetype.

In the remaining two sections, ‘The Empty Quarter’ and ‘Incomprehensible Lesson’, the theme of exile is examined from different angles and in predominantly shorter poems or a few longer sequences like the title poem of ‘The Empty Quarter’. In ‘Paradise of Fools’, Karim explores Emerson’s dictum that ‘Travelling is a fool’s paradise’ and comes to a conclusion that is not dissimilar to Cavafy’s in his great poem, ‘The City’, where there is no escape from ourselves and all the baggage we carry:

Indeed, the very notion of ‘home’ may in fact be little more than an illusion, especially for someone like Karim whose original neighbourhood in Baghdad, ‘al Abbasiya’, was long ago obliterated, existing only in his memories:

In the opening section of ‘Lowfield Road Quartet’ the poet’s nostalgia for his vanished homeland is tinged with eroticism, but is, in the end, insubstantial, evanescent: ‘A curtain falls between me and my vision of home’. Here and elsewhere, Karim’s timeless backdrop invites comparison with the exemplars of a more familiar classical mythology. One thinks of Tantalus straining towards the grapes forever beyond his grasp.

In ‘The Empty Quarter’ another longish poem in nine sections, the poet’s exile is a ‘millstone’, recalling the rock of Sisyphus, while his daily existence is like a maze around which he traipses endlessly, an image that’s reinforced when the poet quotes from his own earlier poems or from a Bach cantata that is endlessly replayed: ‘But Oh, to where?’ / To where? – I let the track repeat.’

The image of a maze might, in less skilful hands, suggest a degree of solipsism bordering on self-pity. However, Karim is too good a poet to fall into such a trap, as he explores his situation from every conceivable angle. In ‘Central Line’, his ‘blurred reflection’ in a compartment window does indeed seem to be the perfect embodiment of his self-regard. However, by the end of the poem, he acknowledges the bad faith of playing a role, whereby one runs the risk of becoming a caricature, rather than the complex being that one is:

Karim demonstrates also that one’s nostalgia for a an idealised past may impede any chance one has of creating a new life, imposing barriers between oneself and those one loves, as again in ‘Lowfield Road Quartet’, when his wife says to him: ‘Come on! Leave your dreams alone / and enter my warm bed.’ Moreover, in his introduction, the poet acknowledges that London has been generous to him. It has widened his poetic horizons and given him ‘the wonder of classical music’. Nonetheless, as a poet, it may be that the greatest price he has had to pay is his separation from his native language and his lack of direct contact with an audience capable of reading his poems in the original:

Note, too, in passing, his insistence upon his native vernacular and not merely Arabic. Fawzi Karim is an exemplary poet and one who, pursuing his own vision, has created a body of work that reflects yet transcends the circumstances of his life.