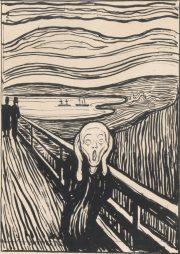 We’ve all seen it a hundred times, identified with it and even messaged using an emoticon version of Edvard Munch’s skull-like face, clutched by hands raised in horror in a distorted, nightmarish world.

But it takes a trip to the British Museum’s expertly-curated Love and Angst to appreciate the man and the artistry that built to this moment of intense anguish, known as the Shriek in Norwegian, and for Munch not just a personal, but a universal pain – hence his original title The Scream of Nature.

Neither was it just a moment.  Rather it was a part of a series of images, named by Munch The Frieze of Life, a reference to his experience of the emotions of losing his mother and a sister, then a string of affairs as he was attracted to women but unable to commit to any one of them.

The exhibition sets the scene for his restless anxiety with the observation that his life-time (1863-1944) coincided with the advent of railways that allowed him to speed between Paris, Berlin and Kristiania, as Oslo was then named, mingling as he went with fellow fine artists, novelists and playwrights, often leading to at least as much drama offstage as onstage.

His native Kristiania, ruled by strict Lutherans who were scandalised by the works of Ibsen and Munch, was stifling and restrictive.

At the start of the exhibition, Munch depicts himself as an austere Kristianian in Self-Portrait with Skeleton Arm.  His head emerges from a black background, like a Lutheran preacher, and at the bottom of the frame is a skeleton’s arm as a reminder of death, which stalked Munch’s anxious world.

The portrait is a lithograph print, setting the tone for an exhibition, which is the first in London to focus on Munch’s prints taken from blocks of stone, copperplate and wood.  Its version of The Scream is a stark, black and white lithograph.  (Munch, whose habit was to repeatedly revisit subjects, created two paintings and two pastel versions as well as numerous prints.)

The blocks, which Munch obsessively kept, are a fabulous insight into the careful determination and innovation as he strove to express his tortured world view.  Their texture and physicality makes us look anew.

Two Human Beings: The Lonely Ones is one of the most appealing examples of his use of jigsaw-style woodcuts, made up of more than one block of wood.  The effect is to emphasise the isolation of the two figures, underlining their inability to be together in what otherwise would be a moment of serenity at the side of the fjord.

In Separation, Munch again takes up the loneliness theme and makes use of long wavy hair, one of his leitmotifs.  It recalls the waves of the fjords and evokes the feelings that in Munch’s universe ripple through nature.  The two characters move apart, tenuously linked by the sweep of the woman’s hair, or, as Munch put it “the long hair is a kind of telegraph wire”.

Apart from being long and wavy, the hair in Munch’s universe is often red, suggesting passion and death.

The two are perfectly linked in Vampire, which Munch originally called Love and Pain.  It shows a woman with flame-coloured hair kissing the neck of a man against a dark, mysterious forest-like background.

His famous Madonna has black hair, but with a halo of red, echoed in the red frame that caused outrage because of its daring depiction of swirling sperm and a foetus crouching in a corner.

And then there is his late sister Johanne Sophie, who died of TB, as did his mother.  Munch is haunted by the memory, which he revisits in painting after painting.

The Sick Child depicts his sister as feverish beneath her disorderly red hair, while a grief-stricken woman bows her head, crowned with black hair in a tight bun.  For Munch the picture was a turning point, but it also belongs to a more sentimental tradition compared with the direct, modern appeal of Munch’s most radical work, most notably The Scream.

While one sister died, another in 1894, was diagnosed with schizophrenia, adding to Munch’s anxiety about his own mental health.

As if in a premonition, he created The Scream a year before in 1893.  In an instance of Munch, as he would have said, of painting not what he sees, but what he saw, The Scream portrays his experience of walking at sunset when the setting sun turned the clouds “a blood red” and he sensed an “infinite scream passing through nature”.

The flowing hair has gone, although the wavy lines of a malign energy pervade the image in the graphic black and white of the lithograph as if engulfing the skull-like, androgynous face at the composition’s centre.  It recalls death once again, and its gender neutrality helps to explain the universal appeal as the anguished figure is neither male nor female.

It’s the climax of the British Museum exhibition but not quite the end.  First, we have a gentler home-coming section as Munch forsakes his European train journeys and focuses on images inspired by the fjords of Christiania and the small town of Asgardstrand, where he bought a fisherman’s cabin.

Munch may never have found equanimity, but in Asgardstrand, he accepted a life without love and embraced his angst, without which there would have been no art.  In his words: “For as long as I can remember, I have suffered from a deep feeling of anxiety, which I have tried to express in my art.  Without this anxiety and illness, I would have been like a ship without a rudder.”

Asgardstrand was the setting for Girls on Bridge, which by comparison with The Scream possesses an almost chocolate-box calm.

The girls mark a transition from extreme emotion as we exit the world of Munch for the inevitable shop, selling screams on pencils, napkins, sketch pads, T-shirts and ear-rings for those who want to turn up to the office with an attitude or for protests on Palace Green.