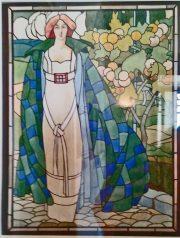 The mesmerising Casina delle Civette (House of the Owls) hosts an intriguing exhibition of masks by Nicola Toce inspired by the Carnival traditions of Basilicata, a region in Southern Italy.

The House of the Howls itself is a permanent exhibition of the artworks of Paolo Paschetto, Duilio Cambellotti and Umberto Bottazzi.  They are mainly sketches and drawings for stained glasses, some of which decorate the windows of the house.  The prince Giovanni Torlonia transformed the 19th century Swiss Cabin in his residence adding huge windows, porticos and turrets, and decorating it with artistic tiles and stained glasses.  The stylised howl that gives the name to the house is a repeated pattern created by Duilio Cambellotti in 1914.  Cesare Picchiarini was the glass maker, one of the best at the time.  Iconic fine glasses are in the Room of the Swallows, with the ceiling painted with swallows in relief matching with the beautiful window depicting black swallows flying among stylised pale blue clouds and ochre trees.  One of the major highlights of the elegant residence are the beautiful staircase of the Four Seasons and the Balcony of the Roses with glasses by Paschetto in yellow, red and orange colours creating a warm lively atmosphere.

In this delightful surroundings, the thirty-eight masks and sculptures by Nicola Toce stand out in their originality and archaic features.  They are traditional and innovative at the same time, created by the artist for the parades that celebrate the end of Carnival in some villages of Basilicata such as Teana, Lavello, San Mauro Forte, Cirigliano, Stigliano and Viggianello.

The masks are made of Papier-mâché and clay, using ancient techniques and are painted in green, red and terra colours.  Legends and myths of a pre-Christian past are narrated in their features and are linked to the cycle of the Seasons, transhumance, fertility rituals, the awakening of nature in spring and the taming of animals.  They represent anthropomorphic fantastic animals and magic creatures connected with archaic traditions that are still present in modern celebrations.  Their meaningfulness is exactly in the renovated spirit of the propitiatory traditions of the Carnival and spring that the people of Basilicata still celebrate today.  They reiterate the ancient rituals to exorcise bad luck and evil spirits.  Toce’s masks embody this interweaving of ancient and new; they are reminiscent of archaic myths and recall horror movies.  The names given to the masks evoke primordial idols and legendary characters of folktales.  The figures often have beards and horns, hair like snakes, disturbing grins and protruding fangs.  As the title of the exhibition remarks, the myths are revisited in a contemporary perspective that cannot deny the past, has its root in it and flourishes from it.

Carnival is the centre of Toce’s inspiration with its excesses that culminate in Mardi Gras (shrove Tuesday) and at the same time die with it.  Life and death coexist between sacred and profane in the funeral procession of Carnival and in the mourning of his wife Quaremma dressed in black, whose name recalls the approaching Quaresima (Lent).   This is also a parody of Jesus’ death and means to castigate extremes.

The craziness of Carnival involves wedding rituals between two men or a man dressed as a woman and a woman dressed as a man, and the burning of puppets and old things to give space to the new ones.  It is a time of letting go and, once a year, you are allowed to lose control, mock everything and every one, included yourself, entertain the audience and enjoy yourself.

The exhibition of Toce’s masks reveals the continuity of traditions between ancient and new in the context of the Carnival celebrated in Basilicata where fertility and agricultural rituals mingle, highlighting the impact of mankind on nature.  Toce’s artwork shows unusual unique sides that reinterpret the myths in an unsettling and meaningful view.

Edvard Munch ‘Love and Angst’. Review by Barbara Lewis. Of All That Ends