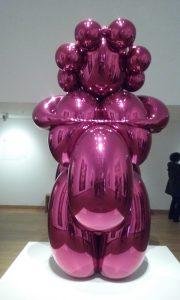 The vitality of breath and its life power expressed in Jeff Koons’ sculptures and paintings mesmerise the viewer at the Ashmolean exhibition.  His work ranges from the Equilibrium series to Banality, Antiquity and the Gazing Ball sculptures as well as reproductions of balloon objects in stainless steel.  The display features seventeen works, of which fourteen are exhibited in the UK for the first time in a project co-curated by the artist himself.  It also responds to the collection of the Ashmolean Museum that comprehends art from prehistory to modern times.  His artworks refigure the past connecting them to a contemporary perspective inevitably linked to the consumerist world of mass production and the glossy ‘reality’ of advertising and marketing.

Koons, born in Pennsylvania in 1955 and working in New York, is a renowned artist who gained success in the 1980s.  His work sells for millions of dollars and is exhibited in major galleries such as The New Museum of Contemporary Art in New York, The Metropolitan Museum of Art, the Serpentine Gallery in London and the Whitney Museum of American Art.  In interviews and videos, he claims that there are no hidden meanings or ironic intentions in his work and there is no judgemental intent.  Some critics disregard his production as kitsch, others view it as important in a historical connection with past artworks.  Nevertheless, it is impossible not to interpret his work as a prudent comment of American society at least, with its sometimes banal iconography and simplified representations that feed mass production and sell widely and easily.

The reproduction of ready-made toys, such as ‘Rabbit’ (1986), or ‘Balloon Venus’ (2008-12) inspired by the Venus of Villenford, are the most significant examples of the exhibition both in their originality and appeal.  They look like inflated balloons on a large scale but are made of shining steel.  They are seamless, deceiving the viewer who wishes to touch it to be sure it is not made of plastic and full of air.  Wonder of wonders, the viewer’s image is reflected in it in multiple distorted ways in a fascinating play of mirrors. Pleasure and guilt mix in a slightly anxious awareness that there is no reliable referent and yet we participate and like it.

The Antiquity and the Gazing Ball series are the major links to the Ashmolean context.  Past and present combine in the reproduction of Greek and Roman sculptures in collage paintings where a sketchy vulva is superimposed referring to Courbet’s painting ‘L’origine du monde’ (1866); or in ‘Antiquity 2’ (dots, 2009-12) where the actress Gatchen Mol in girdle and lace bra is riding an inflatable dolphin.  She is compared to Aphrodite or Galatea and the Monkey, an inflatable as well just in front of her, represents Eros.  This is not only an interpretation of ancient iconography from a ‘free love’ American point of view, it is also an explicit comment on what art means today compared to past mythology.

Gigantic sculptures of ballerinas in softly coloured stainless steel are reminiscent of Degas’ famous dancers but actually imitate, in a huge scale, tiny porcelain ceramics by Oksana Zhnykrup.  Once again, any chance of originality is deviated from the content to the form, in a presentation or production of the artwork that is captivating and luxurious at the same time, though representing mass production objects.  It is a pleasantly acknowledged simulation that blurs the difference between high and low quality products.

The last room displays the Gazing Ball series where a blue shining ball is positioned near or in the centre of an iconic artwork of western tradition, such as Gericault’s ‘Raft of the Medusa’, or Titian’s ‘Diana and Actaeon’.  They are copies of old masters’ paintings that his assistants painted using colour-by-numbers to maintain an even effect.  Famous ancient sculptures in plaster cast are present as well, such as the ‘Belvedere Torso’.  The gaze balls are hand made objects exclusively produced for Koons.  They represent a link between the viewer, who reflects their deformed image in it, and the artwork, in smaller scale this time compared to the original.  It is a way to bring the audience near to art allowing a more relatable approach.

In the shop there are two of his balloon stainless steel sculptures, a yellow swan and a blue dog on sale for about twelve thousand pounds each; they affirm and encapsulate the appeal and purpose of this enthralling exhibition.