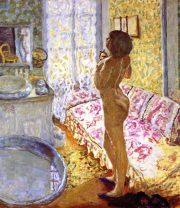 For many of us stuck here in the grey fastness of a London winter, a visit to the 2019 Pierre Bonnard exhibition has brought some welcome relief.

The crowds at the Tate Modern don’t care if Picasso didn’t think he was a painter and didn’t even want to hear him talked about as a painter.  They thirst for the landscapes where colour and composition almost blend into abstraction yet still create recognisable images of a warm, sensuous French countryside, which they can store up and dream about on chilly days in March.

One of Bonnard’s most well-known subjects was his partner of fifty years, Marthe de Meligny, who appears again and again in his work, sprawled naked on their bed, standing, crouching, getting into the bath, bathing, getting out of the bath.  He must have spent hours observing her in their home, gathering material for the time he spent alone in the studio painting her from memory.

The paradox is that Marthe herself has almost disappeared.

To the odd friend who knew about her place in Bonnard’s life she was “sauvage”, a fiercely reclusive woman, who would only let him go out if he said he was going to walk the dog.  One described her as a raucous bird-like creature, frequently silent, constantly bathing to soothe the respiratory problems which filled her with anxiety.

Marthe de Meligny was born Maria Bouchon in 1869 to a modest family in the Berry region.  She moved north to Paris in 1891, reinvented herself as an orphan child whose new name, de Meligny, faintly suggested aristocratic origins and supported herself by sewing pearls onto artificial funerary flower arrangements.

In 1893 she met Bonnard when she was 24 and he was 26.  He showed remarkably little curiosity about her past and only discovered that she was eight years older than she’d told him, when they married in 1925.  Indeed, as he reworked her image repeatedly over the years, her face remained indistinct and her body unmarked by age.

He must have known that a girl engaged in her occupation really wasn’t concealing an aristocratic background and he did not tell his wealthy family about her existence, even after their marriage.  But the gap between them worked well in some ways.  Marthe benefited from his riches and her lack of presentability freed him from the constraints of bourgeois respectability.  Neither was very interested in domestic comfort and they both enjoyed moving around whenever they pleased.

But there is no reason to suppose that they did not share a genuinely affectionate bond and he wrote of her loss with great sorrow in the six years he outlived her.

Marthe had another identity as a painter who displayed her work under the name of Marthe Solange.  She left 700 paintings and drawings behind, which were distributed between her sister and the nieces who were discovered after her death in 1942.  Some of these still turn up in the art market today, so she hasn’t quite been erased.

Still, it’s no surprise though that even one of Bonnard’s admirers, the art historian Linda Nochlin, was driven to exclaim:

“…I am … so repelled by this transformation of woman into thing .., such melting of woman into the object of molten desire of the male painter, that I want to plunge a knife into that delectable body surface  and shout “Wake up.  Throw him into the bath tub.  Get out of the bath tub and dry off”.*

Pierre Bonnard: The Colour of Memory is on at Tate Modern until 6 May 2019

The exhibition is accompanied by a catalogue raisonne which has been a valuable resource in putting this article together.

*The quote from Linda Nochlin appears on page 207

Poems in the Case Christian Dior: Designer of Dreams. Review by Carla Scarano.