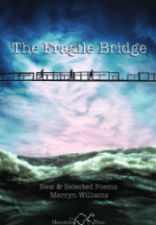 This is a substantial publication of new and selected poems from Merryn Williams’ previous publications, The Sun’s Yellow Eye, The Latin Master’s Story, The First Wife’s Tale and Letter to My Rival. Many of the poems seek to give voices to those, frequently women, who are not usually heard and to explore the aftermath and effects of those hidden voices. The poem that gives the collection its title, “P.N.D.”, looking at post-natal depression, starts,

Readers learn that the victim left behind three close friends and a baby. The poem continues,

It’s a common question after a suicide as people look back and try to analyse if there were any warning signs that could have been picked up. PND, along with mental illnesses in general, carries a stigma. It also brings the additional worry of having a child taken away: the ultimate sign of a failed mother in someone who already feels they have failed. It’s noticeable that the poem doesn’t mention the baby’s father. It is the mother who carries the post-natal burden. It is left to the three friends to step up to carry the baby. Like most of Merryn Williams’ work, the poem uses direct, unembellished vocabulary and uses a subtle rhyme scheme.

“An Unsuitable Job for a Woman” is a sequence in five parts and looks at a female taxi driver from her own, a passenger’s, a bus driver’s, a passer-by’s and a journalist’s viewpoints. It ends

The only female voice in the sequence is the taxi driver’s. It’s a familiar scenario: a woman is blamed for placing herself apparently in danger when she needs to earn a living and no one holds the perpetrator responsible for his actions. The last poem in the new section, “Virginia”, looks at a more famous suicide,

Again, victim-blaming is present in the Bishop’s spouse’s question which suggests that Virginia Woolf couldn’t cope with the onset of the Second World War. The full poem is an unrhymed sonnet. A later poem, “To a Woman Poet”, considers a widow who “blossomed after he died” because she couldn’t write while her husband was alive – another hint of restrictions placed on women to limit their voices.

There are some tender poems which explore family heritage, both of older ancestors and a new generation. “Poem for My Son”, born after a difficult labour, is a sestina that ends,

There are lighter moments. “At the Literary Festival,” considers literary fame,

Later poems pick up the unheard voices theme. “The Suicide Bomber’s Daughter,” now an adult, watches a video left by her late father, who says,

It’s left for the reader to figure out whether the daughter does indeed understand or whether she merely feels the loss of someone selfish enough to abandon her and leave her mother with the burden of raising her alone.

Overall The Fragile Bridge demonstrates Merryn Williams’ exacting, attentive concern for voices that are normally unheard. She uses craftsmanship to skilfully build poems with integrity that are readable and easy to identify with.