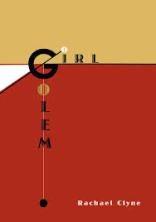 This slender but sinewy pamphlet deals primarily with the poet’s childhood and adolescence in a Jewish tailoring family in Lancashire. Author of the 2014 prizewinning collection, Singing at the Bone Tree, Clyne deftly and candidly traces her relationship with her parents and grandmother, an initially fractious bond that is later marked by far greater tenderness, respect and compassion.

The title poem refers to Hebrew folklore and the myth of anthropomorphic clay figures magically brought to life, often standing as superhuman symbols fighting antisemitic oppression. Although a Golem can be of either gender, its best-known exemplars are traditionally male, hence the title’s oxymoronic tension. The poem’s narrator shows the requisite feisty resilience even before her birth, but initially it is resistance to being born, as she “clung / bat-like to the womb”. She was “made as a keep-watch, / in case new nasties tried to take us away”, an eerily childlike reference to the older nasties of Nazism, in whose wake the birth occurs. Her response to the pressures placed on her is to develop a keen perceptiveness and no-holds-barred directness about the pressurisers:

And then comes the irony of the specific task set the “late bonus”: “be their assimilation ticket, find a nice boy and mazel tov – grandchildren!” However, this artful bathos, deflating the feminist aspirations even as they appeared to materialise, and placing the poem/collection’s title in imaginary air quotes, is counterpointed through the poem’s finale, where Clyne celebrates reaching eighteen in her rebellious spirit:

Nonetheless, the sequencing of poems militates against any sense that the breakaway will be easy. The very next poem plunges us into images from Clyne’s childhood, as if to suggest how strongly it remains present within her even as she ostensibly moves on from it. In ‘Three Piece Suite’ we see family members represented as household objects, locked or even frozen in their austerity-age postures – the antithesis of Clyne’s burgeoning energy. Between them the narrator is “their horseshoe magnet” who “bristle[s] with pins”. How well chosen is that verb in expressing her anger and frustration, with “pins” hinting not only at her modest contribution to the then cottage-industry business, but at the inward pain of such emotions, a form of involuntary self-harm. It becomes increasingly plain that Clyne does not correspond to her family’s hopes for her: she is “grubby-kneed,” a “nosepicker” who “tore the frocks Grandma made you” and “answered back, couldn’t have that” (‘Goodenough’). Meanwhile, her excellent eye for domestic detail emerges in describing the family’s Southport house, and the drab stagnation of post-war Britain. Significantly, the grimness is partly redeemed by the glimpsed possibilities of escape to another world, if only in one’s mind:

The perspective broadens as the collection goes on. Clyne’s political consciousness evolves through the years, to embrace an apparent dismissal of any claim to a place of prominence in the roster of Nazi atrocity, but with a typically close-to-the-knuckle twist she points out that other oppressors have been more successful in reducing the family’s numbers. ‘Mine is Not a Holocaust Tale’ starts on a note that reminded me of Primo Levi’s poem on the randomness of survival or death at Auschwitz (“Considerate se questo e’ un uomo … che muore per un si’ or per un no”), before the word “only” recalls Geoffrey Hill’s chilling dissection of Nazi numerical efficiency in ‘September Song’ (“Just so much Zyklon and leather”):

The poem ends by drawing attention to other groups who have suffered terrible oppression, including not only Palestinians but endangered animals. Some may question these comparisons in terms of relative magnitude, but the key point being made concerns the young Clyne’s evolution as she turns outward towards a world where though the Holocaust remains unique in most eyes, it is not the only example of consummate inhumanity.

As the focus widens we are taken back still further, to the family’s origins in Ukraine, and a journey made by the poet, aware of her privileged state on a train with “linen sheets” and full freedom of movement, in search of her roots. ‘Leaving Odessa’ brings us the discovery that “under my feet / was once a debtor’s prison where Sonia [her grandmother] was born”. Her anger at Sonia’s forced migration is tempered by the wryly amused sense of quotidian banality that she never loses, and that she arguably uses as a shield against the harshness of history:

Meanwhile, other family relationships have moved on and deepened. In ‘The Only Suit He Made Me’, we learn how by the time the Sixties arrive, the longed-for assimilation has occurred and the family business has expanded into a successful enterprise, boasting a “posh showroom”, a “floor awash with pins”, where her father “made garments for mums / who holidayed in Majorca”. The suit in question, though, has the period’s quirky pizazz and sparkle – “bell-bottoms with stitched pleats, / lilac wool cloth and hand-sewn buttons” – allowing the narrator to “strut my stuff on Lord Street, / walk into coffee bars without blushing”, reflecting that

On a more sombre yet still ebullient note, ‘Big Sister’ handles a loved one’s imminent death from cancer with the kind of laconic grimace we’ve grown used to, opening on a note of raucous defiance such as has been shown throughout the collection –

but not shirking the stark reality of what’s coming –

Clyne ends with a muted but memorable clarion call for unity that questions what it means to evolve as a human. For individuals as well as societies and civilisations, does older always mean wiser?

Once more we are cast back to an earlier poem, in this case ‘Chernobyl Museum’, where the nuclear cloud following the 1986 disaster is traced all the way to the Welsh hills:

And an answer to the question about age and wisdom is suggested by Clyne’s observation that the path of that cloud is mapped by “a Japanese machine”, “Gifted by another nuclear survivor”. As in the book overall, Clyne is too honest to allow her hopes for a better future to obscure her doubts about humanity’s ability to move forward: that use of “flower” is perhaps the most trenchant of the many sardonic thrusts in this often uplifting but admirably unsentimental collection.