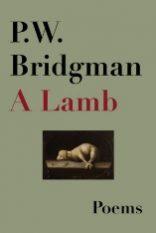 PW Bridgman is a Canadian poet whose work I had not previously encountered. This is not entirely surprising since A Lamb is his debut collection. The London Grip poetry editor informs me, however, that Bridgman’s work has appeared in the Winter 2015 and Spring 2018 postings of London Grip New Poetry and the reader may care to turn to these examples which will give illustrate his distinctive style of narrative poem better than will be possible the via short extracts quoted in this review.

Although Bridgman does indeed have a distinctive style, he is explicit and generous throughout the collection in acknowledging some debt to works by an intriguing array of other poets – for instance Christopher Smart, Sinead Morrissey, Seamus Heaney, Lawrence Ferlinghetti , Al Purdy, Simon Armitage and William Blake. Elsewhere he broadens his sources of inspiration to include lyricists such as George Gershwin, Joni Mitchell and George Formby. The diversity of these influences suggests that Bridgman is a poet who thinks very laterally indeed.

A Lamb immediately makes an impression as a beautifully produced book (although I am not sure why it is named for the shortest and most untypical poem it contains).  Its 120 pages contain only about 40 poems (in addition to a Foreword and other supporting material) and hence the average poem length is around two-and-a-half pages. In these relatively long poems Bridgman tells stories, sets scenes and develops ideas, often using quite plain language but most imaginatively put together in many varieties of free verse. His inventiveness is well summed up in his declaration that a poet

These lines come from “At the corner of Triumph and Pandora” – the in-joke being that these two Vancouver streets are in fact parallel.

The collection begins with a character-based sequence “Jim Begins to Consider Himself”. We eavesdrop on, its protagonist in a variety of situations. Here we are at the passport office

Here we see Bridgman’s knack for authentic sounding dialogue in which small jokes may be buried. In another character-based sequence “The Julian Capstick Poems” about an ex-husband resuming a single life he allows his narrator to reflect that ‘Beth, You Is Not My Woman Now’. Capstick also shares the author’s gift for close and quirky observation: noticing that a shop assistant wears a home-made badge bearing the name Chloë he is moved to ask himself ‘Who knew a Dymo labeller could do an umlaut?’

Throughout the collection Bridgman takes similarly wry and imaginative notice of the trivialities of everyday life. A bishop trims his nails and ‘crescent moons accumulate, one by one like pardoned sins, on the rubber floor mat at his feet.’ Mundane details are particularly poignant when they are observed in the presence of death. After a wife collapses in the bathroom her husband observes

The effect upon those who are present when such calamities happen is skilfully encapsulated in “Mr MacGregor’s Overcoat” as ‘Straightaway, the warmth leaves the room / along with the her of her, more sensed than seen.’

One of Bridgman’s most effective poetic devices is clever use of repetition or echoing . The first part of “We Strive to Dismiss their Prejudices, Mostly with Good Humour” begins

A little later in the poem, the narrator, having duly pushed the egg yolks to one side of his plate, reflects that

and adds ‘God, or someone please help us’ if Irena’s (presumably Roman Catholic) parents ever find out. In another distorted echo, Irena’s father mistakenly uses ‘Vulva’ as the name of his much-prized car – the same type of vehicle to which Jim, the central character in the book’s opening poem, pays homage: ‘In the name of the Volvo, the mortgage / and the cave-aged Pont -l’Évêque.’

The recurring-word trick is used again in “No Writers Were Harmed in the Making of this Whiskey” (readers will have seen by now that Bridgman doesn’t stint in the matter of titles) which begins with two old men settling down for a quiet drink. One of them

Six pages later the poem’s apparently whimsical story has turned to something much darker and it is a shocking and tragic ending that is waiting to be discovered ‘like an unexploded artillery shell.’

A more concentrated and striking use of echoing involves the word ‘grievance’ in “Out of the Bar and into the Black Belfast Night’. It begins simply enough ‘It’s Christmas Eve / and we’ve lined up our grievances again…’ The reader expects some amplification of this remark; but instead the same empty thoughts come round and around again, pushing obsession almost to breaking point.

A good many of the poems – for example “Carrying on after the Carrying On”, “Lych Gate and Yews”, “Grace and Disgrace” – present sad family stories often centred on one particular family member who is especially dysfunctional in his/her own way. While these work well as individual pieces it could be argued that there are rather too many them. Around the middle of the collection I was beginning to feel a bit overwhelmed by a relentless accumulation of harrowing stories. It made a welcome change when the mood shifted and some of the dysfunctional individuals were given a chance to speak for themselves. In “Empowered” a homeless sixty-eight year old amuses himself by walking out into the street in front of cars and making the drivers hit the brakes

An underdog also gets the last laugh in the throwaway give-away line at the end of the threatening looking and ominous-sounding prose poem “Ad Te Clamamus, Exsules Filii Hevae”.

A much bigger departure from domestic drama occurs in “Safari Not Supported But Your Prayer Is Important To Us” in which a couple of hackers are trying to locate God on the internet.

When it turns out that ‘SAFARI CANNOT ESTABLISH A SECURE CONNECTION TO THE SERVER WWW.GOD.ORG”’ there is still some theological consolation to be drawn

Evidently the sky is not the limit of Bridgman’s poetic imagination.