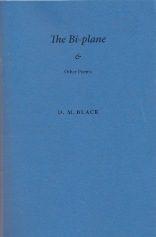 When I gave a very favourable review of D. M. Black’s latest book-length collection – The Arrow Maker (Arc, 2017) here in London Grip in 2018, I had no idea until relatively recently that Black had also published a pamphlet of his poems with Mariscat Press. In Black’s opinion, the poems in The Arrow Maker ‘might seem too pessimistic’, so he set about trying to level things out by producing a short collection of ‘light verse’. However, since light verse ‘thrives in a historical epoch in which anxiety is not too extreme’ and that ‘2017 was not such an epoch’ when the country fell into ‘the lethal hands of the unserious’ we can see how Black’s best intentions were doomed from the start. It is interesting to note that at other times in history, poetry has been thought of as a literary bagatelle or bauble, for mere entertainment, so it is good that these poems, while trying to strike a jocular tone, are also shot through with a serious conscience and a political consciousness. Black seems to imply that we are getting to the stage where our politicians are a joke and the poets are coming into their own as the unacknowledged legislators of humankind. But then again, Black appears more interested in the tragi-comic folly of humanity tout court. We need to start listening to other life forms that we have exploited or overlooked:

Or take the apocalyptic yet curiously soothing words of the trees in “Thoughts in the Presence of Trees”:

The tacit suggestion behind the words of the trees is that the poets are part of the small band who ‘loved us’. While the message of the poem could easily be construed as a very didactic one, it is ultimately saved from this by the almost mock-heroic tone that Black uses which has many of his poems walking a tightrope between laughter and disaster. Take for instance the title poem “The Bi-plane” which seems to show the fragility of human invention, a tiny, flimsy and almost risible achievement in the grand scheme of things:

Many of the poems in The Bi-plane work on literal and allegorical levels. Black conjures up well a mundane realm we all recognise, but his real skill is in showing us how we are as manipulated by others while we arrogantly think we control the world. “In the O2 Shopping Centre” tells us of a large aquarium in a retail centre where the beautiful but fiercely territorial cichlids from Lake Nyanza and Tanganyika are kept from tearing each other apart by being satiated with ‘vast quantities of crustaceans’ so that they ‘mill about all day glassy-eyed in a state of stunned amiability’. There seems to be little difference between the fish and the customers of the shopping centre, who too are kept in a sort of languid materialistic reverie as they look for things to buy that they don’t really need. And before the reader thinks that Black is making snap value judgements about others, it’s worth looking at the poem “Counter-players” which is almost meta-poetic, in showing how Black sees both the temporal and symbolic realms of life as well as the something much greater and ineffable, impossible to spell out in words. Something that can only be spoken of in inadequate human terms of approximation and metaphor:

Above all these poems feel vividly present and contemporary and they speak about a modern human condition, where we are forced into a context in which we must compete with one another which leads us to envy the success of others. Some poems talk about society at large in direct, witty and symbolic ways, whereas others examine the interiority of the poet’s mind and his own place in that society. These come together in the jauntily rhyming poem “A shirt from John Lewis” where the speaker buys a Jonelle shirt labelled Carefree Cotton. As the speaker irons the shirt, they mediate on what is meant by the phrase. The inference, however, is that ‘cotton’ and ‘carefree’ together are oxymoronic – the shirt will have been made in an extremely low-wage, non-unionised economy and the cotton used to make it will have a huge environmental cost. One of the most moving poems in the collection is “A Stupid Thought” which takes place in an open-plan office setting which most people will recognise. How often have we envied others, especially with social media sites that essentially enable us to edit what is publically projected of our lives, so that we only show people our ‘greatest hits’?:

Modern internet-dominated life and its gross competitiveness and one-up-man-ship has made society deeply neurosed. As a psychoanalyst by profession, Black is well positioned to see and write about this phenomenon. In this poem, he puts aside all ideas of ‘light verse’ and shows us his compassion as a poet, which he elsewhere (in “The Eye and I”) refers to as a ‘bodhisattva’ – one who can access nirvana but is held back from doing so out of empathy for the suffering of others on earth. The Bi-Plane, far from being some frothy light verse on vaguely political issues, goes as deep as it can go and shows us the inadequacy and flimsiness of human life and invention from the inside out, and the outside in. In the end, we need to move outside of our egos for a little while. Not only that, we also need to admit our vulnerability and the fact that we are incomplete unless attached to the great scheme of things: