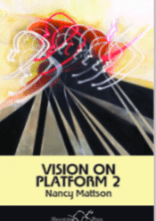 In March 2017, some Carmelite nuns were making their way home via a north London underground station. Carmelites are an enclosed order, so it was unusual for them to be out (they had been to a meeting with the Archbishop of Westminster); but that wasn’t what spurred a young commuter to photograph them on his phone. The station was Seven Sisters. The picture was posted online and went viral in no time. 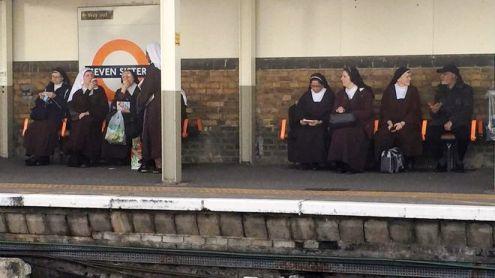 Alongside the photographer was Nancy Mattson, the perfect person to capture the moment in poetry, as “Vision on Platform 2”:

Mattson is at such ease in this, the title poem of her excellent fourth collection: ‘His shot went viral on facebook and twitter,/ enchanting all save a pair of literal souls/ who believed they spied an extra holy knee/ draped in black, or an eighth sister’s elbow.’ But – here is the poet’s wry smile – ‘Who would accuse a man who never cuts/ his hair of cropping a redundant nun?’

Mattson was born in Winnipeg and brought up in Edmonton, Canada. She spent her childhood summers in Saskatchewan with her Finnish grandparents and has written, in her prize-winning first collection (Maria Breaks Her Silence, Coteau, 1989), the life of a 19th century Finnish woman living in Canada. Her second collection, Writing with Mercury (Flambard, 2006) and her presence the same year in Shoestring’s anthology Take Five established Mattson as a poet who strides from Canada to Finland, Italy and England, taking a variety of subjects and voices with her. If, like George Bernard Shaw, she showed her fondness for her native land by leaving it, the roots of her poetry are still deeply in the places of her family and early years. Finns and Amazons (Arrowhead, 2012) gave poetic voice to her great-aunt Lisi’s letters sent from Karelia to Saskatchewan in the 1930s. Mattson’s poetry has an apparently effortless elegance, easy on the eye and ear, with wonderfully unobstrusive use of symmetry and refrains.

This latest collection is in three parts. The first, about childhood, starts with a stunning poem that almost made me forget to catch a train. “Wading for Stones” takes us to the ‘shallows/ of the gravelly Saskatchewan’ where Mattson played as a child:

Before we can settle too long into grandmotherly ‘silt’, we’re off with young Nancy to see “Reveen the Impossibilist”. Like most of us, she is sure she’ll be immune to stage-hypnotist Reveen’s mesmeric powers but:

Section II is my favourite, about how we tell our survival stories. If we’re stumped for words, “The Brothers’ Vow, 1946” tells us,

In “Pen and Ink”, she addresses an artist and former ‘Greenham Common woman’ who ‘caught babies in Brazil, cut their cords.’

Mattson performs her own magic trick of writing in a variety of voices, male and female, often with a sense that each poem’s story will be told only once, and to no-one but us. I was especially moved by the conjunction on facing pages of “Her Decision”:

with “Epitaph, Floating”, perhaps relating to the ‘pregnant girl’, perhaps not:

Balance and symmetry pervade this collection and soon Mattson is telling us of another conjunction of London strangers, herself and a younger mum, who chat about getting children to sleep:

Mattson is a poet for whom religious faith is the warp and weft of life, yet whose words are full of dance, fun and, that most Christian of vices, alcohol. Section III draws this together in some of the lightest poems of the collection. “Her Habit” describes a nun coming into an Italian pub: ‘A blur of grey slid toward the bar…’

Not many collections combine grief, heroism, spirituality, sensuality and humour so rewardingly. Even for an atheist like me, this collection is addictive and fun.

Rosie Johnston‘s three poetry books, published by Lapwing Publications in Belfast, are Sweet Seventeens (2010), Orion (2012) and Bittersweet Seventeens (2014). Her poems have appeared or featured in Hedgerow, London Grip, Culture NI, FourxFour, The Honest Ulsterman, Ink, Sweat & Tears and in Live Canon’s anthologies 154: In Response to Shakespeare’s Sonnet’ (2016) &  New Poems for Christmas (2018). She has read her poetry widely, including Hungerford Literary Festival, Watford’s Big Word festival, Winchester’s Loose Muse, the Poetry Cafe in Covent Garden, the Troubadour, Torriano, In-Words in Greenwich and Whitstable’s Harbour Books. Rosie was poet in residence for the Cambridgeshire Wildlife Trust until she moved to live by the sea in Kent. www.rosiejohnstonwrites.com