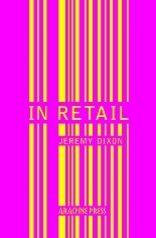 Jeremy Dixon wrote these poems – mainly on ends of till rolls which he then had to smuggle off the shop floor – whilst working in a well-known pharmacy chain. The poems have numbers as titles. In “00/08”, after a sales planning meeting in September for Christmas,

It’s not just about the age gap between colleagues but also how, for the younger workers, there’s always a tomorrow. The quietness of the last quoted stanza raises the question of whether the returned items will find their way back onto the sales shelves or continue to be overlooked in the rush to get shiny, new things out in the Christmas gift aisles. That no one has time to deal with the returns is a reflection of the planners not being aware of the realities of the shop floor and the gap between shop assistants and management. This difference between what management thinks happens and how shop assistants actually work is picked up in “00/14”, which is a set of instructions in case of a disruptive crowd appearing at the front of the shop,

Note how the instructions focus on securing property first. The instruction is to contact another branch to let them know the shop is being closed up, not to phone the police to deal with the situation. It’s only in the final line that staff safety is mentioned, as if an afterthought. Staff can make or break a shop, yet their morale is not considered. They are kept on their toes by an unfair system of competition in “00/20” where management rate individual staff members into one of three categories,

Shoplifting is covered too. One poem points that some exclusive perfume packing has a small dent where it was wrestled from a would-be thief’s coat. A store detective lurks in “00/27” which suggests a cat and mouse game. He is described as

The situations are recognisable, written without judgemental comment and the poems report the shortcomings of petty bureaucracy without ranting or taking sides. In Retail offers insights and knows how to end a story precisely on the punchline. Each page has the title In Retail in grey reversed print at the top. Each even page has the message ‘Thank you for your custom’ in grey reversed print. Each odd page has a different message, e.g. ‘All made in China’, ‘Obey the till’, ‘Hurry they won’t last long’ in grey reversed print. This layout suggests a receipt roll and the poems appear to be printed on the back, a subversively humorous reflection of how they were composed.