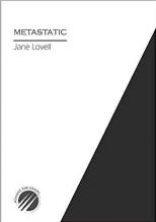 I was sent to the dictionary more than once in the reading of this exquisite cycle of twenty poems. Whilst looking up the definitions of bocage (“Ten Days”) and ‘ spiculated’ (“Your picture”), I also explored the meaning of the title, Metastatic, a word that foreshadows the collection. With ‘static’, there is a standing still, though the crackles of electricity also come to mind. Prefixed with ‘meta’, ‘static’ changes to a medical definition: an adjective describing the development of secondary tumours. Its origin, though, is ‘removal or change’.

There is a duality throughout the work: light and dark; living and dead; the wider landscape and ‘a world now smaller than a day, / a room.’ (“Fireflies”); the natural world and the scientific. Each of these pairings is a leitmotif in the collection, and words are repeated, sometimes in the same poem. ‘Horizon’ is used in the opening poem, “Ten Days”, as a boundary to ‘our whole world’, expressed as an idyllic landscape at first; but later, ‘the man who reads blood’ delivers ‘that word that draws the horizon / into a knot’.

‘Horizon’ recurs in “Two figures in an extensive landscape”, a standout poem in this collection: ‘They spent too long watching the horizon / while he sidled in’, with cancer personified, a figure ‘untying the windows for the moths to enter / and the years to leave.’ This poem draws together much of the imagery that runs throughout Metastatic: a world seen through glass or trapped behind glass; the light of fireflies as a fleeting, ‘nauseous bloom’ in ‘these dark hours’; the natural world in ‘landscapes folded like maps’; the body as landscape.

Light and dark coexist, and often serve as metaphors for the living, the dying, and the dead. The ‘dead light’ of ‘unexpected stars’ in “Your picture” illuminates ‘the curve of a hare’, and suggests that the light, the spirit, of the unnamed person with the unnamed disease – the word ‘cancer’ is never used – will similarly survive beyond their death. Meanwhile, they are caught in the ‘relentless light’ of a hospital room (“One day the rain”), considering ‘the neon mountain range’ of a heart monitor. “The Same Darkness” follows, two poems further on: ‘You fade to shadow’, and here the word ‘ghost’ is used, which recurs in other poems.

Creatures of folklore are summoned: hares, owls, a vixen. Sometimes their significance is made explicit. “Solace” begins ‘Crows become symbols these darks months, / appearing like omens’. Elsewhere, readers will divine their own meanings from “Perspective in a Hare’s eye” and “Owl feather, Richard’s Castle”.

The contained world, ‘smaller than a day’ in the early poem “Fireflies”, extends to wider horizons in “Listen”, and other later poems. Now there are ‘continents’, ‘oceans’, ‘unknown mountains’. ‘Earth resumes its humming’ in “Equivocal”. In the final poem, “Strange world”, there is the solace of the natural world after loss; a move to the outside, after ‘the quiet dark’: