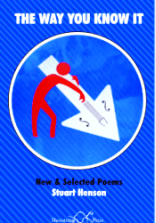 There are some very fine new poems here, as well as selections from Stuart Henson’s six previous volumes. Reading backwards, you are aware of an impressive talent, as in “Her Loneliness”, whose first line runs ‘is as big as an iceberg’, and which builds up until we realise that a woman is going to sink out of sight for good. Henson has also included some ‘versions’ – not exactly translations – of poets whose language is not English. He’s particularly fond of Rilke, but the ‘version’ which appeals to me is “After Pushkin”, a superb poem in its own right:

‘Mosh-pit’? Well, the great realities of life and death haven’t changed between Pushkin’s time and ours, and like all of us then and now he wonders about his own end:

New poems include “After the Dance”, a lovely evocative piece where a girl is waiting for her lover to pick her up but sees only a darkening landscape:

No, he probably won’t.

“A Cosy Crime” is a very funny take on all those old green-backed Penguins which sanitise murder. Henson is also good at sonnets, one of the best of which is “On taking my father’s Keats to Rome”:

“Going Home” also appears to be about his father, returning from the war zone some seventy years ago. There is more family history in “The Lost Boys”, inspired by a black and white studio photograph of three young brothers taken in 1898. We’ve all, I suppose, looked at pictures of our ancestors in their youth knowing what happened later, and in this case we know that the boys are going to be caught up in the First World War:

The poem is too long to quote in full but seems to me far better than some better-known poets have written in the centenary year. Stuart Henson has a memorable and commanding voice.