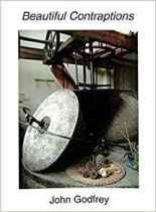 John Godfrey’s poems are often concerned with how things work: but the poems themselves work very well

I mean no disrespect when I say that John Godfrey strikes me as a “chatty” poet – one who is always happy to share a good story or an interesting memory or simply his ruminations on some everyday occurrence. He is a generous narrator – ever keen to share an extra example or one more well-observed detail. In the title poem of his latest collection Beautiful Contraptions he gives, almost literally, a step-by-step account of how to sneak into a British Rail engine shed in the days when steam locomotives ‘ringed the lip / of the turntable pit in silent conference.’ In “Another Country Entirely” – which is one of Godfrey’s meditative pieces seeking to define an elusive ‘something about crossing water’ – he gives multiple instances of bodies of water which separate a here from a there which is subtly but significantly different. In this poem he also shows a charming unwillingness to be opinionated. He does not like to insist on matters being exactly the way he himself perceives them and so he refers to a landscape looming up ahead as ‘Wales (or almost-Wales)’. He applies a similar qualification when he speaks of ‘arriving at a place detached / foreign or seeming-foreign’.

To suggest that Godfrey has a rather conversational style is not to imply that his work is artless. On the contrary, good deal of craft and careful phrasing must lie behind the confidential tone he often adopts. He has considerable dexterity with rhymes and half-rhymes which are satisfying without so dominating the poem by drawing excessive attention to themselves. In a sequence of three poems about a (somewhat reluctant) visit to an art gallery the poet observes a child in a pushchair

The ending however brings a rather more bravura flourish

Sheer delight in word-play, often combined with humour, is evident throughout the collection. “An A to W of Apples” does just what it says in the title and gives an alphabetical list of traditionally named varieties beginning with ‘Abbondaza, Acklam Russte, Arlingham Schoolbys …’ and petering out with ‘Widdup, Wayside, Westfield Seek-no-Further …’ I do have to admit that this one probably gave Godfrey more pleasure in the research and writing than I got from reading: but another variation on the list poem called “David’s Car” is (for me) much more successful. This catalogues a very roundabout journey in a very unreliable car. As a sample episode

and a second verse which begins

On the basis of my comments so far one might think that Godfrey’s poems sound a bit “cosy”; but that would be to overlook some darker ones which he can slip in below the reader’s guard. One such noir surprise awaits in “Winter Dance Party” which – it only slowly dawned on me – is in the voice of one of the musicians who only at the last minute was deprived of a seat on the aeroplane which shortly afterwards crashed and killed Buddy Holly. “Closed Circuit” offers an interesting and unusual view of the four young men who triggered the 7/7 London bomb attack. “River” begins with a peaceful look at the detritus along the edges of the Thames at low tide and then quietly and grimly points out

I needed that ambulance to sidle up before I grasped the truth that the zipped bag wasn’t just somebody’s lost holdall.

There are plenty more good lines that are worth quoting to illustrate Godfrey’s facility for the apt phrase. ‘This road is not being straight with me’ he observes at the beginning of “Mississippi Highway” which is another of his fanciful meditations, this time on the conjecture that initially straight highways might become more bendy as time passes. Pursuing this line of thought to extremes, Godfrey recognizes that ‘I know I can’t expect / the startling concept of oxbow roads / to gain acceptance easily.’ I especially enjoyed a wistful word picture of the promenade at Aberystwyth with the unspoken question of whether ‘there was ever a time when every single bulb / in the lights … was working simultaneously.’

Godfrey also finds clever ways of making trains and railways – which occur quite frequently – seem interesting for readers who are not born-again enthusiasts. Victoria Station, for instance, is described most memorably as ‘suckling its litter of green electric trains’ (this being accurate in the 1940s when the terminus was a “mother pig” only to rolling stock of the old Southern Railway). And sometimes he pleases us with a few words which are both relevant to his narrative and also make a pleasing sound in their own right, as in his description of swans ‘wrestling a muscular westerly’. This poem “Four Swans” seeks to convey the experience of a small stroke via the analogy of being adrift at sea

Several other poems deal with memories and re-lived experiences – not always (one suspects) drawn from the author’s own life. “Lambswool” is a particularly good example, describing a Christmas train journey (‘overloaded and far too slow’) to Torquay. It is night time and so there is ‘no view of the estuary at Starcross, where daylight, / would unroll high tide like a rucked carpet’.

Those four plain words ‘she’s on the platform’ are rendered more powerful by the context that has accumulated in the preceding verses. This memory poem works because it evokes images that resonate for anyone – or at least anyone who has endured a plodding railway journey through an English winter impatient to meet a loved one. It is probably fair to say however that other reminiscent pieces do not work quite so well. “Breakdown” sets out to evoke a road trip in the USA but, as far as I am concerned, fails because it relies on mentioning too many songs and performers I am not familiar with. Similarly “Angi”, which recollects the poet’s struggles to master a particularly tricky guitar melody from the 1960s, feels a bit too introspective for the general reader. (Or perhaps I am reacting out of jealousy because Godfrey’s best effort ‘somewhat short of ‘not too bad’ still far outstrips my own!) I would have been happy to have a few more of Godfrey’s darker poems in place of some of the affectionate memories. But this is a small quibble about a book which for much the greater part is accessible, entertaining, accomplished and warm-hearted.