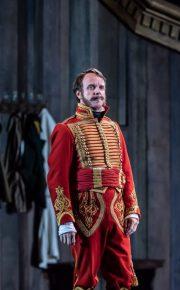 Tolstoy’s great, complex, genre-busting sprawl “War and Peace” is about many things, including Russian nationalism to the extent that when Hitler attacked the Soviet Union in 1941, Stalin reached for the work to promote a patriotic defence of the Motherland.

Prokofiev, who was already working on extracting an operatic version from Tolstoy’s epic tale of more than 500 characters, was obliged to produce a sufficiently celebratory account of victories that came at enormous cost if they could be called victories at all.

In our own politically polarised times, when any sympathy for Russia under Putin is scant, the challenge once again is to convey the individual soul-searching beyond Prokofiev’s fierce drums and stirring brass chords and the Welsh National Opera’s powerful chorus.

David Pountney’s approach is to go for an English language version with sometimes absurdly helpful surtitles, which announce every character and setting, ham up the comedy, and even tell us when a ball is taking place, above a sometimes fussily recreated Russian “beau monde” and a cinematic backdrop.

But if too little is left to the imagination and our engagement is only slowly won, the production truly wins us over with the entry of Pierre, sung by a towering Mark Le Brocq, who even more than in the novel is the opera’s hero as the legitimate heir of Russia, whatever the facts of his birth.

In the contrasts that dominate more than the novel’s title, this noble Russian is the diametric opposite of the frivolous, caddish French flirt Anatole, nimbly performed by Adrian Dwyer.

In Prokofiev’s version, Andrei isn’t given the scope to command our emotions as he does in the novel, but the charge of his relationship with Lauren Michelle’s spirited Natasha is conveyed in a carefully choreographed waltz scene added into Act 1 that measures out their tingling attraction.

More awkwardly, though still lyrically, a death bed scene in the second half frames the lovers’ final reconciliation within the confines of the window of the country house where Natasha first captured Andrei’s heart.

With the focus of the production’s second half on war, not peace – synonymous with love and life – Pierre’s conquest of Natasha is only implied.

In one sense, the battle scenes are very much stated, if not over-stated. At the same time, the full horror is at arm’s length as the soaring music and resounding choruses glorify what should appal us and the authenticity and texture of the harrowing war scenes that Tolstoy wrote from experience elude us.

Still, it feels churlish to argue with a heart-felt tribute to one of the greatest of novels with peculiar resonance for our time and all times.