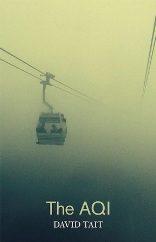 David Tait’s pamphlet Three Dragon Day (smith|doorstop, 2015) was a winner in the Poetry Business Competition, judged by Billy Collins; The AQI, his second full-length collection, builds on the themes laid out in those earlier poems. AQI is the acronym for Air Quality Index, a measure of the amount of pollution in the atmosphere, and Tait makes its effects tangible through the verbal clarity of ‘The Air’, his opening poem–

In three quatrains (this quotation is half of the poem) Tait makes the air visible, like a tide as it ‘rolls in’, as the buildings could be whales, as solid form vanishes in the obliterating swirls of what we’ve learned to call ‘particulate matter’. He works in China, (hence ‘the embassy’) so you might think you can feel safer; after all, he isn’t writing about Britain. Yet my copy of The AQI has acquired an inner lining of newspaper cuttings relating to air pollution in the UK, including one with the chilling global statistic that 90% of the world’s population is forced to breathe toxic air. Tait may have started out to show us the reality of China, but that aspect is closer, now.

This collection includes roughly half of the poems in Three Dragon Day, allowing for a wider exploration of pollution and its implication, both in reality and as a metaphor. Take the use of ‘mask’ in the quotation above; there it is literal, a precaution and practical safety measure. Tait returns to it in ‘The Facemask’ – ‘I wear it on the metro, we all do./ We stare at each other like surgeons/ during a tricky operation.’ The unspoken anxiety, the situation that binds everyone, is quietly underlined. A mask, however, can also provide a disguise, a way of protecting the self as the outer surface starts to replace the inner person:

An examination of LGBT issues, both personal and political, is threaded through this collection; in China, such relationships are political – and not only in China. In ‘After Orlando’, Tait’s longest poem (it runs to thirteen pages) he writes in close detail of the shootings on 12 June 2016 in a gay nightclub in Orlando, Florida, when 49 people were killed. The poem is a collage; personal memories, Ian McKellen’s analysis of Antonio in The Merchant of Venice, the events in Orlando, the last phone calls of the dying, the levels of homophobia in reporting, the attitudes of the Westboro Baptist church (who picketed the funerals), and – above all – the names of the dead, with their ages. It’s the placing of these fragments, all co-existing within the same frame, that gives the poem its emotional weight and coherence; as Tait says in the penultimate couplet

‘After Orlando’ is an ambitious poem, showing how Tait can reach beyond the shorter, more lyric approach. In the same vein ‘Beijing after Tianjin’ lets the collaged detail show the edginess of being non-Chinese in China when the country is nervous. Tianjin is a container storage station, relatively close to Beijing, where a series of explosions on 12 August 2015 killed 173 people, and injured hundreds more. In parallel with Tait’s workplace discussions about students and the viability of a new language course the news levels are constantly changing as photos and video clips appear and vanish;

Tait’s language mirrors not only the clarity of reporting but also the careful exchanges in a second language; he reports minute by minute activity, limits his adjectives, lets the details speak for him and the situation. ‘The TV is full of feel good stories’ he states, as the broadcasters mask the truth, and revert to historical items about The War of Japanese Aggression, which began in 1937 and ended in 1945, seventy years earlier. The poem ends

How, I wonder, can you trust the Air Quality Index when the government/broadcasters avoid the truth?

The AQI is divided into four sections but I’m not convinced that the poems gain from this; they work as a whole when the divisions are ignored, raising questions and issues across and throughout the collection, leaving any comparisons open. They show the strangeness of China and also its closeness to our country, something which Tait starts to explore in the final poems. These are shorter, more lyrical and personal. ‘The Cairns’ is set in the Lake District, when Tait and his Chinese partner discuss visible measures of achievement –

–and how these two separate measures add up to life, or seem to, as clouds cross the top of Silver How.

Even the short final poem, ‘The Water Calligraphers’ depends on the word ‘if’ for its driving force. Tait isn’t a poet to lay down answers; he looks for complexity and his own place within it and records these tensions scrupulously. When he is using a mask he tells us. The final quatrain, closing the collection, leaves the poor air quality and dust for something far gentler –

But this is an ‘if; Tait isn’t content because of all the external pressures that he recognises in these poems. The AQI is a watchful and intelligent collection.