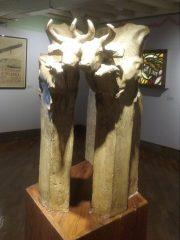 The beautiful park and the edifices of Villa Torlonia in via Nomentana in Rome is an unmissable place in the tour of the capital.  It is not far from the centre and it is easily reachable by bus from Stazione Termini (the central railway station of Rome).

The Villa belonged to powerful Roman families, first to the Pamphili then to the Colonna and finally to the Torlonia.  It has interesting buildings which were designed and restored by the architect Giuseppe Valadier in the nineteen century.  He gave them an elegant, classical outline and reorganized the garden with paths and fountains.  The most important parts to visit are: Casino dei Principi (House of Princes) with its temporary exhibitions, Casino Nobile (Noble House) with the museum, and Casina delle Civette (House of Owls).  There are also Old and New Stables, Jewish catacombs, the Lemon House, the Medieval House and the Red House.  In 1925 Mussolini lived there with his family until 1943.

The Casino Nobile is beautifully restored with interesting frescoes and remarkable stuccos, especially on the ground floor.  Going upstairs there is an elegant detail: the plaster patterns on the ceilings mirror the patterns of the marble floor.  On the first and second floors there is a collection of paintings of Scuola Romana (Roman school), one of the most important artistic movements of Italian art in the period between the two world wars.  The painters of the Roman School were different one from the other but had some common characteristics, they all worked in Rome and had profound links with the city, were dedicated to blending great painting skills, believed in the experimentation of new approaches, and opposed Fascism.  Among them there are renowned artists, such as Renato Guttuso, Mario Mafai, Giuseppe Capogrossi, Fausto Pirandello, Antonio Donghi, Giulio Turcato and Alberto Burri.   Their work is referred as ‘Realismo Magico’ (magical realism); they chose intimate, homely subjects and hidden corners for their pictures in opposition to the rhetoric of the regime.  They also expressed the anxiety of the modern world depicting places of the city demolished by Mussolini’s urban project.

Casino dei Principi hosts an exhibition of Duilio Cambellotti, featuring about two hundred works that delineate the artist’s eclectic career which was influenced by the ideas of William Morris and the Scottish design of the School of Glasgow.  It is an anthological exhibition that displays examples of the artist’s versatile work as an illustrator of books and magazines, creator of posters for events and advertisements, sculptor, ceramist, furniture, jewellery and carpet designer, textile artist, printmaker and stained glass artist.  He also designed scenes for the Greek theatre of Syracuse, and other classical theatres in Italy such as Taormina, Ostia Antica and Paestum, as well as the costumes of the plays.  His style is connected to Art Nouveau but he had a strong political and social commitment as well.  He resisted the perfect industrial product and believed that the artist was a craftsman close to the art of the people that, for him, in the mainly rural Italian environment of the time, were the peasants of the Roman countryside, the Agro Pontino.  His source of inspiration was people’s work, their legends and myths, the buffaloes of the Agro Pontino and the tools the peasants used to labour the land.  This is clear in some of the works on display such as ‘Conca dei Bufali’ (1910), a bronze large bowl with buffaloes, or in the sculpture ‘Le vacche aratrici’ (1924-25) where the busts of the cows are the central piece.  They are pieces that evoke a mythical agrarian world considered morally important and aesthetically attractive in opposition to the industrialization that was advancing in Italy, though slowly compared to other European countries.

Cambellotti denied the hierarchy of arts, a concept which is clearly showed in the exhibition explaining his tendency to mix and experiment in different techniques, following the Wagnerian idea of ‘total art’ (Gesamtkunstwerk), ranging from paintings to the graphics of posters and advertisements, stained glasses, furniture and even toys.  He also took part in an important social project, the ‘Scuola del Popolo’, People’s School, that meant to bring education to the illiterate peasants of the Roman countryside.  He designed posters to advertise this project, decorated schools and illustrated the books with the letters of the alphabet making drawings to simplify learning through images.  In this way he combined his social commitment with his work for companies, and for public, civil and ecclesiastical patrons.  He illustrated the Florets of St.  Francis of Assisi, produced stained glasses with religious themes and realized private house furnishing and interior spaces for exhibitions.  He worked for the magazine ‘La Casa’, the House, and took part in Monza’s famous International Exhibition dedicated to decorative arts in 1923 and in 1925.

The exhibition illustrates every step of this engrossing, unconventional career in different sections with significative examples of his major works starting from the posters he produced for the theatrical performances he contributed to as set and costume designer as well, to the advertisement for the Fiat Balilla, ‘La Balilla dell’Impero’, the Balilla of the empire (1937), to interior and furnishing designs, stained glasses, also present in the window decorations of Casina delle Civette, ceramics, textiles inspired by Middle East art and projects for monuments.  His style looks for a synthesis, a harmony that combines his ethical commitment and the aesthetic message where the role of the artist is in unifying craftsmanship and the themes and symbols of labour linked to the agrarian archetypical Italian heritage.

More works by Cambellotti are in Casina delle Civette, both in stained glass and furniture.  This is a unique building which was originally a Swiss cabin, or rustic chalet.  The prince Giovanni Torlonia liked to live there so much that he transformed it, adding annexes and altering parts.  The final result is complex, multi-faceted, incredibly attractive and mysterious.  From outside it looks like a mixture of medieval, rustic, Renaissance and vaguely northern style.  Inside it there is a special charm in its narrow corridors, wooden stairs and floors and variably sized rooms, all decorated with superb glass windows.  The emblem of the owl is recurrent, probably hinting to Giovanni Torlonia’s passion for esoterism.  There are owls on stained glasses realized by Cambellotti, but also on capitols, stuccos and tiles.  The place is so intimate, elegant and fascinating that it is said the prince preferred this small house to his rich palaces.  On the front door is his motto: Wisdom and Solitude.

It took four years to refurbish the Casina delle Civette after it was completely abandoned for more than forty years, but now it’s worth visiting as well as the rest of Villa Torlonia both for the beauty and peaceful environment, and for the riveting exhibitions displayed in its elegant buildings.