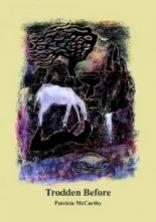 The title of Patricia McCarthy’s sixth collection works well on several levels. It deftly invokes the fact that both the physical and emotional territory covered by the book’s subject – her uncle Colonel Eugene McCarthy, O.B.E., D.O.S., on whose brief autobiographical report she has based her project – has at least in part since been traversed by herself, during three years spent in Asia, and that therefore in a sense she is herself the subject almost as much as he is. It could also, consciously or otherwise, allude to this collection’s having been preceded by the excellent Letters to Akhmatova, in which McCarthy attempted a similar task of poetic biography, tracing the Russian poet’s life with haunting compassion and in scrutinised detail. Again this sequence is a mixture of fact and fiction, the product of the sophisticated poetic imagination which claimed the National Poetry Prize in 2013.

We are taken on a journey – or perhaps the word voyage would better describe the drama, vicissitudes and periodic reversals that Eugene voluntarily threw himself into – which begins with the First World War and continues for thirty-odd adventure-packed years, across some of the more troubled parts of central Asia (mainly India, Afghanistan and what are now Pakistan and Iran), during which in addition to his involvement in various campaigns, he marries a woman, Sheila, who increasingly becomes the focus of the narrative. Alongside repeated allusions to Hafez, the fourteenth-century Persian poet whose line “What we speak becomes the house we live in” forms the first of several poignant opening quotations, there is a parallel trek back into Irish legend and folklore, as McCarthy explores both her and her uncle’s Gaelic culture, further enriching these already multi-layered pages with visions, among others, of Cormac MacAirt’s goblet of truth and the lethally magical sword of Fergus mac Roich. Perhaps the book’s touching moment is the poem which expresses Eugene’s determination to wed his bride in Ireland even though it means a tortuous journey home from Bombay, while the eight lines of poem XXII (out of 39 in all) are worth quoting in full as a measure of the cultural melange that by this stage has been formed in the heart and psyche of the peripatetic soldier. They also exemplify McCarthy’s occasional but effective use of rhyme within the ghazal-based forms she generally favours.

That notion of spouses travelling through one another anticipates the later sections, where Sheila becomes a protagonist in her own right, as the isolated army wife cut off without much money and even less news of her intrepid husband:

Initially seeing herself as “nothing but an empty shell” without him, she grows into something much more, when becoming ever more independent, responsible and adventurous with the passing years, living in a tent and then a small hut in Jullunder, during the Second World War, before returning to Ireland to oversee the schooling of the couple’s children. By now her experiences have become part of her being in a manner reminiscent of Tennyson’s Ulysses –

while her viewpoint has acquired a certain worldly cynicism, if not quite an articulated feminism, as for instance when she reflects on “the men off, / fiddling expenses, boasting about the labels / on their whiskey”. In the next poem, the book’s penultimate and one of its finest, the souls of the places she has seen have infused her in ways we have seen earlier, in somewhat different terms, with her husband’s own spiritual development. In a sense she rises above the colonial world of servants and fellow memsahibs, into a spiritual sphere that is adduced several times during the collection by references to Sufism and other eastern philosophies and religions, though these often embrace a candid sexuality:

McCarthy admirably refuses to either condemn or defend the imperialistic aspect of her uncle’s career, leaving us to decide whether he and other Irish soldiers who fought for the Empire (or so they were told) in World War One deserved the nationalist vilification they faced on returning home. The opening poem, on this theme, is entitled ‘Prologue: Treated Like Dirt’, but that judgment could come from the soldier’s mouth, rather than the poet’s. Similarly, Eugene’s part in the brutal suppression of the 1931 Burma Rebellion elicits a terse, deliberately ambiguous closing comment, which again may either be imagined as his own and/or his niece’s:

That rather Yeatsian phrasing is typical of McCarthy’s diction at times. A great admirer of Yeats, she both name-checks him, or rather allows Eugene to do so in a reference to a honeymoon location he and Sheila shared with W.B., and often hints at his influence, as in the final line of poem XXI – “you sit proud on the mantelpiece of my heart” (a somewhat more comforting coronary metaphor than Yeats’ “foul rag-and-bone shop”) – and in phrases such as “the terrible vulnerability / of unconditional love” (XV). The poem about First-World-War Irish soldiers cannot but recall ‘An Irish Airman Foresees His Death’. And the book’s close (spoiler alert here) may also reflect something of Yeats’ “terrible beauty”, his tormented ambiguity about warfare – sometimes arguably necessary, more often simply and unjustifiably destructive.

The final piece, a prose poem, focusses on another of the poet’s great loves, horses, as Eugene and Sheila become proud owners of steeds such as the aptly named De Valera, who they turn into successful racers, and a dramatic race is enacted with characteristic McCarthyesque attention to detail:

Ultimately, horses – or more accurately a Gaelic-style mythologised idea of them – come to be seen as the only true representatives of emancipation, achieving a level of freedom that neither soldiers nor those they either fight or protect can reach:

More than Dylan Thomas’ words on death, that final word of the collection suggests the colonial world that Eugene, outwardly at least, inhabited, which, whatever its Independence-focussed post-war pretensions, could not in itself ever aspire to generating true freedom. Instead both he and Sheila find a degree of liberation in their inner worlds and quests, as symbolized by their horses. Of course it is also, perhaps primarily, the poet’s own quest of self-discovery. This profoundly moving account of that search merits and rewards many re-readings.

My Pen – My Selfie Stick Excursion to Limehouse Town Hall, by Jane McChrystal.