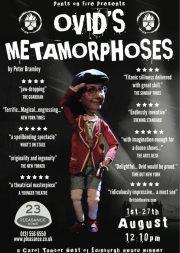 Ovid’s Metamorphoses comprise nearly 12,000 lines and over 250 myths that have inspired more modern writers as great as Shakespeare and Dante.

Taking up the noble tradition, director Peter Bramley sets his selection from Ovid’s classical accounts of endless transformation against the trauma of World War II and hints at the climate change we now fear as, like the curses of the gods, a devastation that cannot be reversed.

The slight risk of Bramley’s direction is that the result sprawls out of shape as we lurch from metamorphosis to metamorphosis.

But a show that is hugely ambitious by the standards of most low-budget, tiny-cast Fringe productions is, on the whole, satisfyingly clever and pleasantly surreal.

And provided we condone as in keeping with the period setting the decision to make every accent either stereotypically Cockney or frightfully posh, the cast is consistently strong and musical.

We can thoroughly enjoy the substitution of the underworld with the Underground and “You’ve changed” is the perfect theme tune.

Less natural was the comparison of Theseus’ encounter with the Minotaur with a delicate hospital operation when, for me, the pre-surgery bed bath, was dangerously close to Carry on Doctor titillation.

Subtler humour derives from the supreme marital relationship of Sam Ivor as Jupiter and Chloe Levis as a merciless Juno determined to get the better of her husband’s epic infidelities.