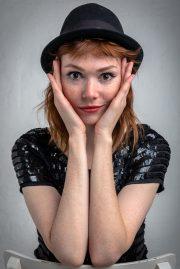 What do you do when life gives you lemons?  Make lemonade is the wrong answer, says Elf Lyons, who is the product – and that’s not too economic a term – of father Gerard Lyons, former economic advisor to Boris Johnson, artist mother Annette Lyons and the Philippe Gaulier clown school on the outskirts of Paris.

A good economic answer is you can get a far better return if you don’t squander your best resource in one go and instead put the lemon in a jug of water and get a pub crowd to bet on whether it’s possible to balance a pound on it.

Better still, in the spirit of Elf’s artist mother, is to attempt the impossible and make lemonade without any lemons.  You might fail, but the endeavour will be interesting.

Elf Lyons’ hour-long show, a look at economics that is as light as the song of the chiffchaff bird, has solid ingredients, as Elf has clearly picked up economic theory by osmosis.

Where she achieves the all-but impossible is in making a fringe audience care about the difference between Milton Friedman’s monetarism and John Maynard Keynes’ preference for stimulating economies through government expenditure, but, in this apolitical space, it’s unclear which works best.

The father who looms so large in the show and has been among the audience might even envy his daughter’s crowd appeal, but she’s the first to acknowledge her debt to him and the jibes are loving.

One of my favourite lines was her reference to how, as an economics lecturer, he tells his audience what he’s going to tell them, then tells it to them, then reminds them what he’s just told them.  “He’s not a nuisance,” she insists; he only lectures people when asked.

If his approach is male and authoritative, Elf’s is to hide behind a Liza Minnelli persona, complete with a baby-girl accent and a skimpy sparkly dress.  The joke’s on us, if we think she’s betraying generations of feminism; she just wants to have fun with her femininity and why shouldn’t a woman with a cute voice and a clown’s endlessly rising eyebrows know all about economics?

One woman who does emerge badly from it all is Theresa May, imagined by Elf cowering at the bottom of a drain with the rest of her government.

Trump also gets a slight as his tweets, along with antibiotic-resistant gonorrhoea, rank among life’s unpalatables in Elf’s rendition of “My Favourite Things”.

She also transforms the hit “Downtown” into “Downturn” and boogies along to “Let’s Get Fiscal”.

She’s not quite the only female clown or the only comic to joke about the economy that the Edinburgh Fringe has produced, but she is a standout it’s hard not to appreciate whatever your views on Brexit.

In the inclusive atmosphere of her show, that most divisive of issues gets only a silent reference in the form of a small elephant, lurking at the back of the stage and patterned with the stars of the EU member states.