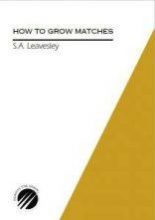 I admire the sure-footedness of S.A. Leavesley’s writing, her attention to injustices against women, and her delicate use of the imagination to outwit, to ridicule, to leap forward. How to grow matches is an exciting addition to the published work of this accomplished poet.

In these poems women appear in many different guises – as dolls, as mannequins (with a clever erasure of Plath’s poem ‘The Munich Mannequins’), as matriarchs, and as characters in stories, paintings and a photo-shoot. Their visibility is problematic; Leavesley’s women are conscious of being at times observed too closely, at other times invisible.

The poems start with and return to the image of a Matryoshka, a doll-woman who at first seems entirely conventional, “eyes cast down”, “flowers on her belly”. But the poem subtly undermines this impression; this doll ‘painted by a woman’ has unsettling qualities that only emerge on careful reading. That “open mouth, like she’d swallow / anything whole” – is it a sign of submission? Or a threat? “Everything curved, nothing straight” – is Leavesly describing a feminine stereotype? Or hinting at clever evasion tactics? I was delighted when a poem near the end of the book returned to the doll, making it this time an even more sinister image, less easy to decode:

This later doll is a hiding place for hard-to-get dollars, “a nested space of secrets”. And, inside, the anger still rankles in “unvarnished splinters”.

Giving a new twist to a stereotype, asking us to reassess those cast-down eyes, is characteristic of the poems. I especially liked ‘Climbing / Wall’ in which there’s a shift from the bound feet of Chinese women to the protagonist’s climbing shoes: an elegant escape from the strictures of her grandma’s history:

For me, Leavesley has an irresistable way with imagery. I very much enjoyed the playful exploration of ‘Her cumuli collector’, in which clouds become the language of a love affair, peopled by “washed shadows”, polar bears and snow cats, cumuli that eventually lose their sunlit charm, leaving the woman invaded by a “rain of dark angels”.

There are two poems which touch on the idea of ‘How to grow matches’. Leavelsey’s matches, “those like pink-tipped bulrushes”, seem both vulnerable and dangerously combustible; there’s a sense of barely-controlled rage that smoulders through the collection. There is humour too, bordering at times on the surreal, as in ‘Family trees’ where advice on growing nut trees segues into a wickedly funny recasting where ‘nuts’ become “your man’s balls”, exploited so that “he’ll bear jewels for his mountable witch.”

In the moving poem ‘The cow that ate all the plums’, the character of the cow hooked on a farmer’s discarded plums, “sugar crystallised away from stones”, is developed quite comically, then deftly linked to human suffering:

Some of the poems refer to others in the canon, ancient and modern; one on Midas’ “secret daughter” is perhaps a little too reminiscent of Carol-Anne Duffy’s ‘The World’s Wife’. But Leavesley still succeeds in springing surprises. ‘From His Uncoy Mistress’ spins off from Marvell:

but the poem ends on a failure to seize the hour:

This is a collection for our times. The pared-back elegance of the poems is as powerful as the writer’s commitment; while staying well clear of preaching, Leavesley conveys both the limitations and humiliations women continue to face, and the many faces of resistance. In ‘That Christmas’, a magical ice maiden who appears on a lake becomes an emblem: