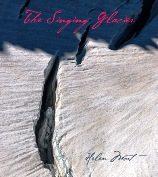 The Singing Glacier is a small book that explores massive nature, encounters with the sublime and draws attention to the damage being inflicted on ancient ice.

At the heart of the book are six poems by Helen Mort, writing that emerged from fieldwork in south-eastern Greenland where she explored the landscape not simply as a poet but as a climber and a collaborator with composer William Carslake and filmmaker Richard Jones. In August 2016 Mort and Co spent three weeks camping close to the calving face of the Knud Rasmussen glacier. Their days were spent climbing it, crossing crevasses, led by experienced guides. They also listened to its strange sounds, “Listening to the moulins was like hearing a Welsh male voice choir singing from this great big hole in the ice,” observed Carslake.

On return, the three produced an interdisciplinary response to the Knud Rasmussen and surrounding landscape. The entire work – poems, film, music – has been performed several times. This Hercules Edition chapbook highlights Mort’s poems within contextual material that sheds light on the field trip and the issues it raises.

The book opens with ‘Hand Of Ice,’ a conversation between Carslake and Mort. It ends with ‘Sounds & Silences,’ an essay by David Cooper on acoustic geographies and the poetry of place. In between come the poems, starting with ‘Glacier Song,’ which is in three parts. It tracks the sounds and silences of the glacier through the changing light of a day. For Mort the challenge is how to speak of its immensity, how to reveal its silences?

Conversely, the surrounding mountains are mute. Though Mort has spoken elsewhere of her suspicion of anthropomorphising nature it seems that here, she has no option. She poses questions to the glacier via the growing light of day:

That hint of the school uniform suggests Mort finds herself shy as a schoolgirl in the presence of such authority. Throughout the sequence, she tackles the impossibility of capturing the dimensions of this landscape by negotiating the massive and the minute: “… three whales in the water / miles below …/like ink in a huge jar,” and, “the voice of a stone-coloured gull / alone on an iceberg…”

In the third section of the poem the indifference of the glacier is revealed as it, “carries on / rehearsing privately,” while Mort examines her relationship with this place,

Meanwhile the glacier is, “articulate/… doesn’t need a word for itself.”

Mort expresses her sense of awe, paradoxically, by acknowledging the limits of language. ‘Glacier Song,’ as with others in the book, is an extended, exploded lyric, with some lines of only a single word. This kind of lineation reveals the pace of thought, the wait for the right word, the space where no word can be found.

In ‘In Defence of Cliché’ she makes the problem of tired or inadequate language part of the solution, again owning up to her loss for words:

The poem ends with, “… our mouths/stuck on the silent word for awe.”

‘And Noah’ is a poem of found language, the words of a local resident, selected and lineated. It recalls Mort’s visit to a local museum with him and his explanation of the items on display. It opens with the line, “Here is a drum,” a phrase that becomes a refrain through the poem and another approach to exploring the theme of sound and sense.

A bold move in finding ways to articulate these experiences comes when Mort gives the glacier a voice in, ‘The Glacier Speaks.’ The glacier’s opening question expresses the frustrations and demands of the poet’s task: “… how are you going to score my silences?” Once again, Mort responds with an extended, exploded lyric, a long form that suits the subject and reveals a significant development in her work.

In the opening interview, ‘Hand of Ice,’ Carslake talks of the “friction” between the creative disciplines as mirroring what’s happening in the landscape. This conversation between poet and composer offers fascinating glimpses of the musician’s creative process. It is illustrated with facsimiles of his notations of the northern lights, translating image and sound into musical notes, plus his responses to the rhythms in the landscape, the sounds produced by the calving face on the glacier, which he describes as “rhythmically complex.” This collector of sounds seems the ideal collaborator for a poet. Not only has Mort participated in their shared attention to such a particular landscape, she has also been witness to his creative process. Both experiences seem to have taken her out of her comfort zone and have opened up new spaces for her poetry. It will be interesting to see what she does next.

As well as Carslake’s notebooks, throughout there are reproductions of watercolours by Royal Academician Emma Stibbon, offering haunting images of cracking ice, snow capped peaks.

This limited edition of 300 is a gem of book, with much packed into the 40 pocket-sized, cleanly designed, pages; even the physical presentation of the work challenges our perspective. As Carslake said of the Greenland experience “I’ve never had my sense of perspective messed with so much.”

Pamela Johnson is novelist & poet. Her third novel, Taking In Water, (Blue Door Press, 2016, https://bluedoorpress.co.uk/books/book-1/) was supported by an Arts Council Writers’ Award. Her poems appear in magazines, anthologies and were exhibited in Tidelines at Poetry In Aldeburgh, 2017. She teaches fiction on the MA in Creative & Life Writing, Goldsmiths.