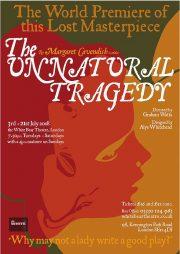 Writer, philosopher and English aristocrat Margaret Cavendish (1623-1673) was way ahead of her time and she knew it, writing: “I regard not so much the present but future ages”.

Her characters were also prescient, declaring of her play “The Unnatural Tragedy” that audiences would say “she did not write it”.  Then it was because she was a woman.  Now it’s because a play written 360 years ago and having just received its premiere performances feels utterly modern, so much so that mobile phones, flights from Venice and even vaping seem not anachronistic but part of the action.

From the start, it does not shock us when the young Monsieur Frere (Jack Ayres) receives a summons while wenching in Venice to go home and be married in England not from a breathless messenger but from a mobile phone text.

Director Graham Watts is a master of reviving lost classics and while we are incredulous at the age of the play, we completely believe in its characters and plot that explores all that can go wrong in relations between men and women, from unrequited love to rape and incest.

Such subject matter alone was not enough to bar performance: Shakespeare, Jacobean tragedy and the ancient Greeks and Romans had already tackled it.

As an outsider from the male mainstream and a woman from a royalist family writing after the puritans outlawed theatre, Cavendish doesn’t merely borrow.  She is original and highly modern in placing violence and tragedy at the extreme end of her analysis of sexual politics.

Without spoiling the plot, which is racked with emotional tension, it does not conclude with every last end neatly tied off and there is no simple moral answer.  Virtue may or may not be rewarded and women can behave just as foolishly as men, although a woman’s highest folly is not to challenge a man.

The women get the most and many of the best lines as they generate lusty, laugh-out loud humour and nine of the 13 parts are female.

Alice Welby, as the Soeur to the ultimately sinisterly named Monsieur Frere, is nominally the heroine and her dignity and poise are every inch the part.

But for me it’s the four Sociable Virgins who are central.  They are overgrown schoolgirls, wearing with attitude ridiculously cheerful uniforms of kilts and red jumpers, accessorised with trainers, hair bobbles and ankle bracelets, who run rings round their matron (Eluned Hawkins) with their lively discourse on the classics and on how they will handle men if indeed they condescend to marry.

The first to be called away to her social duty is Mademoiselle Amor (Phebe Alys) and the most unnatural tragedy is to see her girlish spark replaced by her pining for the emotionally unavailable Monsieur Frere.

Next up is the First Virgin (Madeleine Hutchins) who snares the weak wealthy widower Monsieur Malateste (Alan Booty) and, in a joyful reversal of his oppression of his previous wife, we relish every second of her triumph over him.

It would be heartless but for what we have witnessed before as Malateste’s first wife Madame Bonit (Alison Mead) was broken by his philandering and lack of love.

As a play, the most obvious fault is that it is overly episodic, but under Watts’ direction, this does not prevent our emotional involvement.

In his programme note, Watts tells us there are hundreds more plays by women from centuries past that cry out for performance.  May this expert reviver of lost classics bring them on!