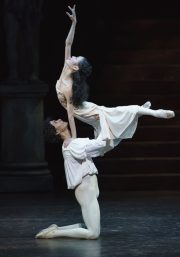 Kenneth MacMillan’s 1965 creation of Romeo & Juliet for the Royal Ballet hit the headlines when the premiere went to Margot Fonteyn and Rudolf Nureyev at Covent Garden displacing Lynn Seymour and Christopher Gable for whom the was created.  The ballet is rooted in the 1960s spirit of youth culture which championed sexual freedom.  I first saw it in the 1990s at Covent Garden with original designs by Nicholas Georgiadis and costumes by Yolanda Sonnabend.  The work, set to Sergei Prokofiev’s 1935 composition, is one of the most thrilling dramatic ballets ever produced in the twentieth century.

Just before his death, MacMillan restaged it in 1992 for the Birmingham Royal Ballet.  He did not use Georgiades and Sonnabend’s designs but selected Paul Andrews to create new visuals for the touring company.  Georgiadis’ aesthetic was rooted in the late Renaissance whereas Andrews’ brief was to set the story earlier in the Italian Renaissance.  This does not make a huge difference in the look of the work but there are moments when clearer staging would have been more effective and a theatre director’s eye would have been useful at certain points in this production.  For example, when Juliet takes poison, and is believed to be dead, her parents and attendants rush to her prone body.  Because her bed is not raised, and her head is pointing upstage, and because the family also look upstage, we lose all faces and see no drama at all.  This production is so under-lit so that the general wash flattens out the individual creating a general murk.  Is this Lighting Designer John B. Read’s intention or is it that a technician neglected to raise the lighting levels for Sadler’s Wells?

But this is a dramatic ballet focusing on Shakespeare’s doomed lovers and it is the dancers who should lead the action.  The Japanese ballerina Momoko Hirata creates a Juliet who is a believable fourteen year old with her delicate frame.  She is a strong actor and is able to portray the obsession with poignancy and fight.  Her technique is flawless and she is well matched in her Romeo, the enigmatic Chilean dancer César Morales.  He too has acting talent that can express both machismo and gentleness.  The choreography lacks an erotic charge but Hirata and Morales try their best to inflect their performances with this dynamic.

Does MacMillan’s Romeo & Juliet still have power as a major epic ballet? MacMillan’s brilliance was his talent for interpreting a violent, autocratic, European patriarchal society and on re-examination it is clear that the work seems even more relevant than it did in the sixties.  In The Dance of the Knights, during the Ballroom Scene, MacMillan exposes the full weight of this elite society’s dominance.  Simple choreographic lines reveal the immense weight of aristocratic power.  The scene where Juliet is forced by her parents to marry Paris reminds us that forced marriage is very much part of our own world.  Tribalism, hate and sectarianism in the Renaissance is also the story of today.  Despite the occasional visual weaknesses in this production, MacMillan’s spectacular reading of Shakespeare still excites.