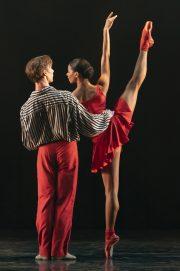 Polarity & Proximity, a triple bill, follows the success earlier in the week of Romeo & Juliet.  This London programme’s aim is to reveal the range of styles this strong company employs.  It is certainly exciting to see the ensemble’s blatant display of diverse dance languages.

Alexander Whitley’s Kin premiered in 2004.  What I particularly enjoyed in this work is its playful interrogation of dance itself.  Whitley’ is a choreographer who possesses a fine intellect as well as a refined aesthetic.  He plays with traditional forms and questions their rigidity.  An arabesque swiftly moves to a sharp angle.  Elegance suddenly becomes inelegance.  The classical vocabulary shifts to jazzy.  Women’s bodies sometimes look like arrows as their acute arabesques slice through air.  There is a constant ‘dialogue’ between dancers.  I also liked Jean-Marc Puissant’s neo-brutalist set design and Phil Kline’s thrilling score.  As soon as this short ballet was over, I wanted to see it again.

The programme notes give insight into the choreographer’s personality.  Whitley says that he is ‘not asking any big questions ‘whereas George Williamson, who premieres Embrace, tries to philosophise about being ‘Other’.  This is one of the most pretentious ballets I have ever seen.  It is full of theatrical cliché.  At the centre is an angst-ridden man clutching himself in a state of existential worry as he looks for love or perhaps sex.  Williamson’s dance language is stale.  It lacks the breadth of vision seen in Whitley’s Kin.  The connection/non-connection of straight or gay couples strives very hard for meaning but the tone is merely a wash of general agony.  The old clichés of strobe and dry ice are trotted out to no effect at all.  I found this creation often risible and certainly puerile.  I have no desire to ever see it again.

Twyla Tharp’s In the Upper Room was made in 1986 to a commission by Philip Glass.Tharp has been called the both the Nijinksy and the Busby Berkeley of our age.  What does this mean?  Certainly she uses an utterly classical legacy which she simultaneously stretches and challenges.  In this brilliant 42 minute piece, the classical is expressed in the red pointe shoes worn by some of her dancers but the women also wear red ankle socks and some are in trainers so that we know that we are in modern America and never in the territory of the Bolshoi.  This is a compulsive ensemble piece which explores space and time while sharing the utter pleasure of dance itself.  Here is no pretension or striving for meaning.  It is a testament to Birmingham Ballet’s training that the Company is looking as good in the modern repertoire as in the classics.  One such dancer who shines in both genres is Fergus Campbell who gave us a passionate Paris in Romeo and Juliet and now displays a louche insouciance in the Tharp.

What works here is the synthesis between Tharp’s witty and stimulating dance, Norma Kamali’s red, black and white costumes, Glass’ pulsating rhythms and Jennifer Tipton’s clear lighting, all of which are interpreted wildly by dancers whose evident enjoyment of marrying the classical with the modern is infectious.  When the last note was played, I wanted this ballet to start .all over again.