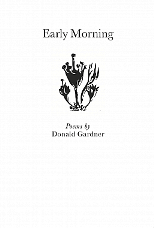 Early Morning is the first collection of Donald Gardner’s own poetry (as distinct from his masterly translations from the Dutch of the likes of Remco Campert) since The Wolf Inside appeared in 2014. Without offending Gardner or his previous publishers, Early Morning is – speaking from a crudely aesthetic standpoint – easily the handsomest of all of his productions. Although it is a pamphlet, it has the presence of a full collection and that’s perhaps because every poem has been meticulously honed to pull its weight. Not only that but every poem speaks eloquently and lucidly to its neighbours as well as to the reader. Gardner has said that he prefers to write in the ‘early morning’ because this is a time before all of the irksome issues of the day and of getting on with it begin to flood the mind.

Gardner has also been careful to stress that morning is not so much the theme of the collection as ‘the background music’. His day job is in translation (in English and Dutch mainly), and usually of literary texts; and in this light these poems seem less like celebrations of the morning – aubades and albas written by John Donne to Ezra Pound – than small victories of the ego, in clawing back some time for itself from the chorus of other voices that Gardner deals with on a daily basis. This conflict is one of the central sources of power for this collection, the poet as creator who needs isolation but realises that no poetry of much worth is written in a monastic bubble or vacuum. In ‘Room Where I Write My Poetry’ we are given a grimly mock-heroic glimpse of the poet as ‘selfish monk’ who has turned his back on the world and its pleasures in order to punish himself by trying to write. In ‘April in August’ sunshine is brought into the life of the speaker who is struggling to write (in ‘a state of unholy deadlock’) in the form of two gifted collections of poetry coming through the letter-flap, leading to the small epiphany:

Any poem might be self-generated but Gardner’s, even at their most self-lacerating, take other people and life forms into consideration, such as in ‘Crawl Space’ where a small hiding space from WW2 underneath the speaker’s living room floor reminds him of other lives. ‘Pushing the Envelope’ is one of the most effective examples of how a poem might be written in seclusion but have a wide, populous application. Poets are always on the look-out for lazy and clichéd language, such as the phrase ‘pushing the envelope’, which they then try to imaginatively rejuvenate:

Even if Gardner is honest in his self-loathing as a poet struggling to write, his exposure to the world always keeps his ego in check and gives his poems a winning humility. In ‘Waylaid by Nostalgia’ the speaker decides to go into an old literary haunt and café in Rome only to find it has been gentrified for the tourists, but he realises that writers can take all forms, shapes and sizes:

Many of these poems focus on the urge to write and the sometimes fruitless search for inspiration, but again there is always a dialogue with something or someone else, so that poetry can actually be an escape from the self, as in ‘Difficult’:

Another major theme of Early Morning is, paradoxically, about getting older and the day getting later. The opening poem ‘Windows on the World’ is a stark, if witty, glimpse at how vulnerable we become when we are reliant on something such as a pair of spectacles, and what happens if these are lost somewhere in Amsterdam at night? ‘Shorter than I Thought’ is Gardner’s memento mori, or danse macabre where death is personified as a straight-talking Hackney tailor measuring the speaker up for a funereal suit: ‘Long or short,’ he says, / is something I decide’. Despite the grappling with mortality in this collection, the strongest two poems in Early Morning are celebratory ones for a partner / lover. In ‘Steep Yearning Curve’ we see how the poet wants to compare his lover and her voice to a flower, but this is somehow unsatisfactory and old hat. It is only when the poet brings his knowledge of the Dutch language to the English-language poem that the poem suddenly lifts up:

Philip Gross has a poem in which he considers the homonym ‘spoor’ which features in both Dutch and English, meaning the tracks of platform in Dutch and ‘tracks’ or ‘traces’ of animals in English, but somehow Gardner’s poem here has the upper hand for being so tender and unforced. The closing poem is, curiously enough, one of praise to the morning – ‘Amsterdam Aubade’. Again the poet considers the Dutch word ‘maakbaarheid’, that you should not live beyond material and physical means, only engage in what you can finish / achieve. This seems a serviceable philosophy, but it’s hardly one a poet could live by, and luckily Gardner does not, as he lies in bed with his partner it occurs to him that:

I am of Ireland by Seamus Finnegan. Review by Julia Pascal. A Third Colour