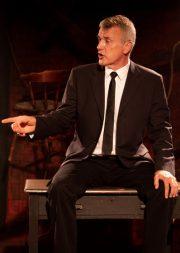 I Am Of Ireland is an epic piece of theatre rooted in Irish identity, politics and history.  It journeys from The Troubles to The Good Friday Peace Agreement and on to today.  The form is that of early Brecht with its multiplicity of disturbing scenes offering a mosaic of several political and cultural conflicts within the thirty two counties of Ireland.  The challenge to the Catholic Church’s stance on abortion last month reveals that the new liberal voices are demanding to be heard.  In this play, Finnegan shows some of those complexities which have emerged in the new Ireland.

Finnegan’s musical opening scene is a hilarious multi-vision of sexual and religious identities but, if humour is often his language, it is a dark one that explores murder, faith and racism.  The Belfast-born Catholic playwright is a self-imposed exile.  As with James Joyce, Finnegan acknowledges the ambivalence felt by the Irishman who cannot live in his own country and yet who carries Ireland within his every blood cell.  This theme is most directly explored in scenes evoking rivalry between sixty year olds, one of whom stayed in Belfast and the other who lived his life in England – the enemy country.  Finnegan suggests that they who came of age with the Beatles and the Stones are still consumed by the gigantic presences of Patrick Pearse and James Connolly.  For Finnegan and his contemporaries, history is not a distant country but a bitter after-taste passed down the generations.  The interesting tension in the narrative drive is the interplay between Church and state, sexual chastity and sexual freedom, patriarchy and feminism.  The importance of education and religion are recurring themes that are provocatively dramatised.  Finnegan shows the agony of the Belfast priest who is forced to deal with the sexual scandals of his brother clerics while fighting off British state pressures to mix Protestant and Catholic schooling.  Bravely, the play explores a new racism where white supremacist ideology occurs in both Catholics and Protestant societies.

Finnegan smashes stereotypes in a most satisfying way.  Ken McClymont’s vivid production is in sympathy with the playfulness and poetry of the writing.  Sometimes male actors play female characters and vice versa.  This highly talented ensemble is gifted at representing the new Ireland where the binary of Catholic and Protestant, Republican and Loyalist, no longer dominates the national debate.  The production boasts a multi-talented cast who play several roles with huge engagement.  Shenagh Govan is outstanding as a fire and brimstone priest.  Saria Steel is touching as the daughter who breaks her Catholic mother’s heart by choosing to become a nun.  Euan Macnaughton subtly suggests the slow burning pain of exile.  Richard Fish is a charismatic  as the Bishop who tries to reconcile Rome with West Belfast.  Jerome Ngonadi reflects the history of Irish slave owners with poignancy and acuity.  Angus Castle-Doughty cleverly reveals the blind stupidity of the white racist.  Sean Stewart has great commitment in all his figures of authority.  Imaginative lighting design by Luke M Francis helps us forget that this script should be on a large stage.  Indeed, even though London audiences will certainly enjoy the style and passion of this provocative and stimulating text, it needs to be produced in Belfast and Dublin on larger stages and seen by the population it addresses.