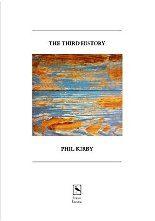 Phil Kirby’s The Third History wears a key influence on its sleeve – “He began writing shortly after getting his first teaching job in Essex and reading Larkin’s ‘Mr Bleaney’ in a school anthology” – but this is no bad thing. ‘Re-Reading’, for instance, recalls ‘The Whitsun Weddings’ (“none / Thought of the others they would never meet / Or how their lives would all contain this hour”) in its lifting commentary on the feelings produced by a photograph of two women on an old-fashioned pleasure boat dropping from a book:

And Mr Bleaney himself is almost physically present in the numbing scene of stock-taking and loss conjured by ‘Not Now’:

They are almost parts of a whole. The reader shudders, recognising the poise and deadly balance of this portrait, and perhaps hears the end of Larkin’s own harsh vision chiming in:

However, though Larkin peeps out of the volume here and there (and what better guest for a poet of loss and regret?), The Third History is very much Kirby’s own. He maps a stark territory: the harshness of life, and its inevitable end (‘A Viewing’, ‘Their Mother’s Lament’, ‘The Porch Watchers’); modernity’s thoughtless erasure of the past (‘The Name’, ‘Be Not Afeard’); comfortless nature (‘Artless’, ‘Adrift’) operating on simple, cold instinct (‘The Fox Stanzas’). Yet in the fox sequence, there creeps in a small sense of hope:

The blank routines of other animals (particularly birds), as here, begin to be granted a kind of contentment in their own nature, and the pattern extends to human life. No one reading The Third History could conclude Phil Kirby believes in sunny uplands, fairy-tale weddings or Brexit unicorns, as so often the book is unrelentingly grim:

These searing images are never gratuitous, in each case making a small gesture towards illumination while acknowledging the darkness: at the close of ‘Janet and John’, for instance, we find “a broad indifferent sky, / so bright it makes itself be seen … and there’s the struggle of the light / to penetrate these rooms”. And in May Swenson’s painted gate, the poet captures a similar ambiguity: “you were about to laugh / at the way I’d splashed about, / drawn this strange world/in which we’d never walk.” The collection as a whole chooses to explore such worlds of darkness, loss and devastation – those anticipating a turn to the sunny uplands will be disappointed – but at the same time, chooses to mark those moments which offer understanding, even a glimmer of hope, with which to address the dark. The close of ‘North Light’, another poem springing from the death of a brother, at first unutterably bleak, concludes with such a glimmer of something else:

That the collection is so dark might seem off-putting, but that is not the case. Rigorously honest, it deals front and centre with the aspects of life most poets tuck away into one or two of their more contemplative poems, and is all the better for it. Aside from a small tic (deploying pithy word-pairs, such as “beam and trap”, “stalk and stick”, “tug and snag”, a bit too often) The Third History is bracing and salutary. Its achievement is summed up in a single short poem which distils everything to its essence, and stands for the book as whole:

AOP50: Images that Defined the Age. Review by Jane McChrystal. Paris in the Cinema. Review by Julia Pascal.