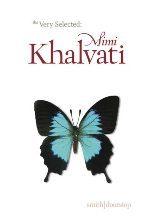 David Ferry, introducing his excellent translation of ‘The Odes of Horace’, notes that the Odes are ‘expectable’ That is, they deal with topics that are known, comfortable, and unsurprising. However, the ‘expectable’, Ferry continues, also

Mimi Khalvati’s poetry is, in the best sense’, ‘expectable’. She writes about love, memory, ageing, and the natural world. Many of her poems are in disciplined forms that still surprise and delight the reader.

Consider the ghazal, four of which appear in this collection of twenty-four poems. In her hands, the ghazal, a couplet form that originated in 7th century Arabia (and is perhaps Khalvati’s ‘signature’ form) is perfectly rendered. Both lines of the first couplet, and the second line of subsequent couplets end with a repeated refrain (the radif). A rhyming word (the qafia) immediately precedes the refrain. In the last couplet the poet’s name (actual or disguised) is presented. We may ask why this form should be slavishly followed in English. Indeed, many fine English-language ghazals deviate from these strictures, in the way the sonnet — originally Italian — can show up as a plain 14-line poem without any particular rhyme scheme or meter. But that’s the point: the classic mastery Khalavati demonstrates is ‘expectable’, “a kind of discipline”, making the poem all the more vivid when it most surprises.

Here is an example following the discipline of the form; and in iambic pentameter, the underlying rhythmic breathing.

The surprise comes in the final couplet when we realise Khalvati has all along been ventriloquizing the voice of Hafez. (Hafez (1315-1390) is one of the most highly regarded classical Persian poets, best known for his collection (divan) of over 400 ghazals.  Khalvati was born in Iran.)

The majority of the poems in the Very Selected are not composed in strict forms. But Khalvati’s discipline is still revealed in nine poems written in unrhymed couplets that approximate free verse, driven by repetition and echoic sounds. To take one example:

The poem is tenderly nostalgic throughout, until an abiding pathos is unfolded within the final couplet. A heart-stop moment. We trust this poet.