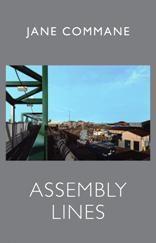 Towards the middle of this collection the sonnet, ‘The Hearts of everyone in this room,’ has a line which is key to Commane’s project; the hearts are: “Curled as little fists flexing under ribs /…/ filling each with their own fierce song.” Commane’s poems are fierce songs to a post-industrial Britain that’s been left behind and to an unknown Brexit Britain that lies ahead.

The post-industrial landscape is that which lies around the Midlands towns that once produced cars, specifically Coventry where Commane was born. Poems speak with pin-point accuracy of “heartsick towns” where “heartlands become poundlands.” In ‘The Shop-floor Gospel,’ we see how tearing out a town’s centre is, “pacified …/with retail parks.”

Coventry was also Larkin’s hometown where he claimed his childhood was “unspent.” The speaker in these poems recalls younger days as, not so much unspent, but full of the feisty anger of resistance. The multi-part poem ‘National Curriculum’ is a reminder that, while industry declined in the 1980s, new school syllabuses were in the ascendant. Five parts of this poem each tackle a subject. In History we learn:

The poem is an incisive catalogue of what the new lessons did not include, the result being:

Ultimately, the years of waste send “… a coarse wind / through the resistance.”

The youthful energy begins to disappear like the cars that once rolled off the assembly line:

For all the energy of these poems with their insistent syntax, ‘Sand’ is among one of the most memorable for the way in which it slowly reveals the sheer weight of an increasing inertia.

Sand accumulates throughout the life and the poem; it “… followed you home, waited at the bus stop,/…/… filled your sheets with a million/tiny silica jibes…”

The collection is not all about looking back. The Brexit poem, ‘UnWeather,’ is a tour de force that demands we look again at this “… crumbling biscuit nation.” It’s another multi-part poem. Some of its five parts are in the form of anaphora, this listing gives force to urgent demands for new ways of naming what is happening: “We need a new word for how the bigotry in the mortar/became the bricks and stones and broken windows.” Elsewhere there is talk of this “dithering island.”

Commane is assured in her handling of the sectioned, long poem where the cumulative effect of the parts begins to carry the weight of an essay but without undermining the intense lyric of each section. These are poems that demand the reader sit up, think again: “… even in our age of surfaces … / what is hidden, messy, within, still matters.”

Commane’s gaze is always penetrating beyond the surface and beyond the individual self; she looks out at the world, its hidden histories, and also at the natural world. There are poems that speak of an Irish heritage and of horses; the horse being an animal that can never quite be possessed: “Horses laugh at our expense … /… trot to our bidding/broken, bought and sold, but only ever possess themselves.”

The poem ‘Disturbed’ considers the consequences of tampering with a blackbird’s nest full of newly hatched chicks:

The use of the second person seems to include us all; the idea of the easily damaged reverberating beyond the nest to school, town, country.

In this first, book-length collection Commane confirms she’s a poet for these troubled times. With that combination of bold diction and craft she shows that poetry can say much beyond the pronoun, “I”.

Pamela Johnson is novelist & poet. Her third novel, Taking In Water, (Blue Door Press, 2016, https://bluedoorpress.co.uk/books/book-1/) was supported by an Arts Council Writers’ Award. Her poems appear in anthologies and were exhibited in Tidelines at Poetry In Aldeburgh, 2017. She teaches fiction on the MA in Creative & Life Writing, Goldsmiths.