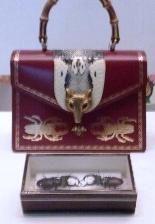 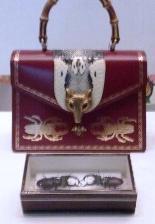 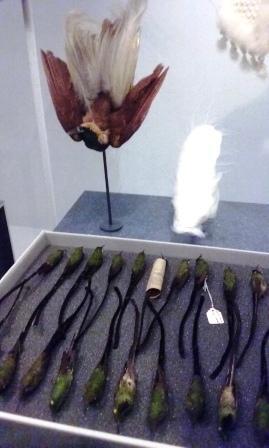 Two appealing and thought-provoking exhibitions at the V&A question our troubled interaction with nature, an ambivalent relationship where inspiration from nature mixes with its exploitation. The major one is in Gallery 40, Fashioned from Nature, and a minor free exhibition, Myth and Mortality: the fairy-tale world of Carolein Smit, is in the Ceramics Galleries, room 146. The use and abuse of nature for profit, pleasure or just food is combined with the imitation of the natural world; its plants, flowers, animals, shapes and shades have been an inexhaustible stimulus in the production of stunning objects.

The fashion industry in its current form is one of the top five polluters in the world. What and how we can learn from past mistakes in order to build up a more sustainable version is the main theme of Fashioned from Nature. It displays rich clothes and accessories of superb beauty, exploring the production and use of materials as well as the pollution caused by their manufacturing and the consequent exploitation of natural resources. This has always happened but in the past it was on a much smaller scale compared to our modern industrialized world.

This issue is clearly represented in the dying process. Both plant dyes and synthetic ones release pollutants in the use of mordant to fix the colour, and of oils and soap to wash the fabric involving great amounts of water. A similar process is required in the cleaning of wool (scouring) and in cotton printing. Flax, such a natural and apparently innocent product, needs great amounts of water to grow as well.

Moreover, before 1800 industrialization, the production of clothes was costly andon a reducedscale , causing less air and water pollution. The mechanization of the textile industry, the coming of steam power and the high production fuelled by the trade all over the British Empire increased the contamination of the environment enormously. Fashion became mass production on one hand, as ready-made clothes were affordable to a larger number of people, but it was also increasingly sophisticated to meet the demand of the rich, always looking for exotic items. The exhibition stresses this big change, happening between the 19th century and modern times, accentuated by the increase in population and the low awareness of the poisonous effects of textile manufacturing.

To make the argument clear the exhibition is divided into sections – flax, wool, cotton, fur and feathers –  with captions and explanatory videos to show how the different materials were processed, pointing out how much fashion took inspiration from nature but also heavily exploited it. Slaughtering animals to use their skin, fur, feathers and bones was a common practice before plastic and synthetic materials were invented, which mostly replaced natural ones. Examples are in the use of whalebone to shape women’s garments and to make accessories such as umbrella frames and walking sticks causing an overhunting of whales. Ivory, turtle shell and mother-of-pearl, extracted from now endangered species, were used to make fans, canes and buttons. Beavers and seals were slaughtered in great numbers in Canada to provide felted fur and sealskin, reducing the animals’ population to dangerous proportions. 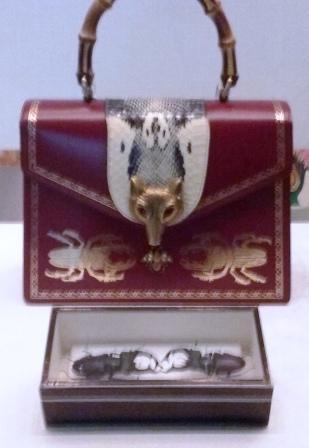 The exquisite items on display provoke mixed feelings of admiration and aversion. There are richly decorated fans and engraved ivory canes, ladies’ muffs made with albatross’s breast feathers, capes made with swan and eider’s feathers, an overcoat lined with the fur of thirty two Russian wolves, in a time where there were no North Face coats, or a pair of earrings made with the iridescent heads of two honeycreeper birds. Thinking about all the animals killed to produce such luxury items, the effect on the viewer is a feeling of hope that this is not going to happen again.

Moving to the first floor, the exhibition shows a comprehensive display of how nature inspired fashion in modern times in shapes, colours and textiles. Glamorous outfits of prominent fashion designers demonstrate how nature is part of us, inspiring and making our culture. Excellent examples are in Jean Paul Gaultier’s Cat Woman evening gown with the front of the dress crafted from beads reproducing a cat head and fur; or a dress from Alexander McQueen’s last collection, Plato’s Atlantis, with its iridescent colours alluding to life underwater; or the Gucci’s handbag with a metal fox head for a clasp and two printed stag beetles on the front; or the Fabergé imperial gown by Giles Deacon printed with birds’ eggs of the British Isles.

The emphasis today is on a more sustainable and eco-friendly use of natural resources. Leading designers in this field are Stella McCartney, Katharine Hamnett, Vivienne Westwood, Tiziano Guardini and Diana Scherer. They aim to use traceable resources that employ less water and do not pollute and to recycle clothes or other substances to reduce the environmental impact. Some experimental and innovative materials are on display, like fabrics produced from fruit waste and left-over materials, animal-free leather, wearable ‘paper’, roots and plants textiles. Not all these products are wearable, cheap or efficient but are ideas for a more sustainable future in the world of fashion.

Water scarcity seems the main concern of the exhibition, with the final clear advice to live with less in a more human world, that is less aggressive towards nature. Let’s hope that technology, which proved to be devastating in the 19th century, will find possible solutions with more targeted recycling such as reusing and cleaning water, filtering polluted air and the creation of eco-friendly materials, a programme that is in part already implemented.

Carolein Smit’s fairy-tale world is a sensational exhibition displayed in only one room at the end of the Ceramics galleries on the sixth floor. The figurative glazed hyper-coloured ceramic sculptures explore the hidden sides of religious art, mythology and fairy-tales. The sculptures are powerful in their glossy bright colours expressing theatricality through shocking images. 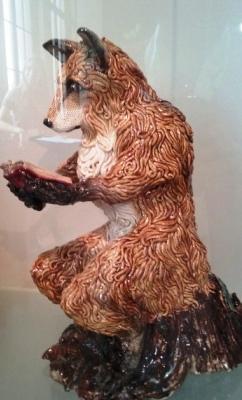 Death, suffering and decay are the main themes emphasizing our ambivalent relationship with our own ‘natural’ side and with the environment. The duality implicit in our love of animals is figured in ‘Hare on a cauliflower’ (2010) with the rib cage open and the internal organs spilling out. Dangerous wild sides of humanity are in Smit’s wild men, part beast part human, reminding us of instincts and desires that always resurface. The ‘Fox reading a bird book’ (2016) is the most ambivalent and ironic piece pointing out the shrewd ruthless ‘human’ side of the animal, testified in numerous fairy-tales from Aesop to Collodi and Roald Dahl, and its aggressive ‘natural’ instincts.

Other interesting pieces are her religious hyper-realistic images such as ‘The man of sorrow’ (2017) representing Jesus Christ after the flagellation covered in thick 3D drops of ceramic bright red blood, or the ‘Skeleton with a blue bird’ (2014), an apparently joyful grinning fellow covered with precious ornaments. It recalls baroque style saints and martyrs of the Roman Catholic devotion where jewels and ex-votos are offered to obtain a miracle or a reward after life.

The artist’s intentional exaggerated stress on the duality of the relation with our ‘natural’ side and the profitable misuse of the environment is somewhat disturbing, questioning us in its repulsive undertones and prompting awareness of our most unconscious desires.

The consistent threat of mortality is present in the form of disease, death, cannibalism and decay. The ‘Medusa’s head’ (2018) already decomposing with snakes coming out of her mouth, is no longer a menace but rather stresses our vulnerability. ‘Death in Paradise’ (2018), two panel installations the artist created for the V&A exhibition, recalls the Medieval dances of death with human and animals decomposed figures. They are the only white pieces of the exhibition displayed on a dark background stressing that death levels us all, human and animals, and eventually no one can escape it. This reveals the subtle influence of the Flemish theme of vanities on the Dutch sculptor, so much present in the Dutch still lives of the 17th century. But Smit subverts the religious theme with her insistence on decay and on the implicit violence of sacrifice, which is an element of our relationship with nature.

Both exhibitions consider in stimulating different ways how human beings engage with the natural world and their impact on the environment, evoking awareness of our indissoluble symbiotic connection with nature.