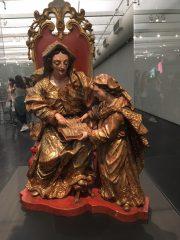 One of the joys of the MASP in the Paulista Avenue, Sao Paulo’s equivalent of the Champs Elysees, is that when you pay for entry (every day except Tuesday) everyone else is too busy making or spending money to block your view of old and new masters.

Even then, Hieronymus Bosch’s Temptation of Saint Anthony – one of at least 16 surviving versions of the original – still attracts more than its fair share of attention.  It’s a testimony to the cross-cultural and cross-temporal reach of an artist Renaissance art biographer Giorgio Vasari dismissed as fantastic, absurd and grotesque that the Paulistas pore over every detail of his work.

That’s not to say they don’t appreciate the rest, which ranges from fierce Tang dynasty (618-907 AD) gate guardians with their, to us, comic snarls, to contemporary Brazilian art.

In between, there are outstanding examples of van Gogh, Picasso, Cezanne and Mantegna.  Mantegna’s heart-felt Saint Jerome Penitent in the Desert is in contrast to Bellini’s depiction of The Virgin with Standing Child, which is markedly less tender than many madonnas of the Italian Renaissance, as the intelligent, informative commentary to the exhibition observes.

In each case, the notes are on the back of the works suspended functionally in chronological rows, a system that serves to maximise the number on display from an even more extensive collection stored in the vaults.

Leaping through the centuries, it seems as if every great European artist is represented.

From van Gogh, The Stone Bench, stark, massive and tomb-like, depicts the bench in the grounds of the asylum at Saint-Remy where the painter confronted his inner tumult and perhaps contemplated his own end.

There’s also Matisse who can turn a Plaster Torso into a sensual riot by casually pairing it with a vase of flowers, while Picasso is represented by the cubist, muscular Bust of a Man as well as a louring Portrait of Suzanne Bloch.

I was also pleased to stumble on a surreal Max Ernst: Bryce Canyon Translation 1946, which seemed at home on Brazilian iron-red soil.

From Brazil itself, there is much to savour, including the work of Artur Timotheo da Costa (1882-1922), one of the country’s greatest artists.  Together with his brother Joao, who also became a painter, he began his working life as an apprentice at the Brazilian Mint, designing stamps and making prints.

His two works on display The Boy and The Lady in Green tell the story of the clash his talent transcended between a black underclass and the white, European colonisers.

The Boy, beautiful, black, natural, noble in a simple white shirt against a neutral background stares sorrowfully or is it defiantly – or are we making assumptions?  The Lady in Green, stifled in layers of opulent fabric, in a claustrophobic bourgeois interior, appears bored, vexed, trapped.

Da Costa’s grounding in the Mint is a link to the work of Switzerland’s Ferdinand Hodler (1853-1918), which also a connection with officialdom.

His portrait of a Logger exerting every muscle to fell a tree was commissioned by the Swiss National Bank for bank notes, but the painter was dissatisfied when it was reduced in scale, so instead it was exhibited full size to critical acclaim.

The links and interactions between Europe, South America and Africa flow through the exhibition.  Sometimes the result is authenticity, sometimes the truth is artistic or emotional not literal.  There is also parody and plenty of political and social statement.

Dutch painter Frans Janszoon Post (1612-1680) travelled to Dutch Brazil and was inspired to paint didactic works relaying an idealised version of colonial rule, such as his Brazilian Landscape with Anteater.  The exotic anteater lurks in the foreground of a lush undulating paradise.

Edouard Manet only managed to convince his middle class family to allow him to become a painter after a trip to Rio de Janeiro that was followed by his failure to pass the entrance exam to the naval academy.

The works that eventually ensued included the curious Mr Eugene Petuiset The Lion Hunter – a fictitious, parodied imaging of life beyond Europe.

Born in Montevideo, Joaquin Torres-Garcia, studied art in Spain and his work straddles Europe and Latin America, as well as the classical and the modern.

His Church in Terrassa is peaceful and small in scale in contradistinction to the towers of steel and glass all around the MASP, which itself is a monumental modern block.

Brazilian Benedito Calixto endeavoured to preserve the Brazil of the recent past with his nostalgic depictions of the low-rise Sao Paulo coastline of yesteryear.

Agostinho Batista de Freitas brings us more or less back to the present Sao Paulo with his naïve View of MASP 1978.

He also gives us Piolim Circus 1971 in which the clown draws the crowds as the art gallery does not: one solitary visitor climbs the stairs to the exhibition, while the masses are entertained at street level by Piolin the clown, misspelt as Piolim by the artist whether by design or accident.

Self-taught, de Freitas worked in a toy factory and was dismissed for drawing during working hours.  He found his place at the MASP after selling one of his drawings to Pietro Maria Bardi, then a director of the gallery.

A floor below, a temporary exhibition is devoted to an artist who never made it into a gallery in his life-time.

Instead Aleijadinho, or the little cripple, the son of a Portuguese artisan and his slave, blended Brazilian, African and European culture in religious statues for the churches of Minas Gerais during the gold rush in the 18th and 19th centuries.

They mark both continuity and departure from the Mantegna and Bellini in the gallery above: continuity because the Church patronised and inspired western art for centuries; departure because Aleijadinho brings the distance of an outsider.

The results, carved in wood, vary between an agonised, more or less conventional Our Lady of Sorrows, elegantly clad and multiply stabbed, and another version pared down to little more than an artist’s mannequin doll with a crude metal halo – arguably with equal emotional force.