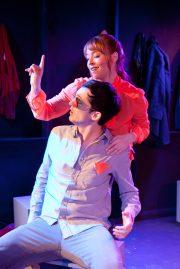 The London theatre scene could easily manage without another musical about love.

But the UK premiere of this Australian-born celebration of the greatest of emotions by Peter Rutherford and James Millar is nevertheless as welcome, even as necessary, as every generation’s attempts to redefine love for themselves.

It’s a rendition that is of the moment, with references to Facebook and mobile phones, and the relationships it describes span the gamut from lesbian, gay, straight to a three-some that’s the most enjoyable of the lot.

This update on the clichés of musical romance also takes the shrewd decision to ditch the tired formula of hero and heroine who see stars in each other’s eyes and instead explores the stories of seven couples with a first dreamy take in part one and a reality check in part two.

Even in the first hormonal rush, the emphasis is on the mundane.  Beneath the stage make-up, these couples are down-to-earth and unglamorous and sing lyrics rooted in the everyday.  Kettle for instance is made to rhyme with petal to music that is more quirky than gushing.

The highest risk songs “A Plastic Bag” and “When You See Someone’s Shit” confront the least romantic aspects of any human being and allow true love to conquer.

The four-strong cast that shares out all the parts – Charlie Bowyer, Alasdair Melrose, Ariane Sallis, Jessica Tripp – are convincing as musicians, actors and abashed lovers.