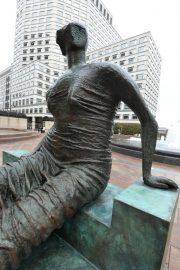 “Indomitable Spirit” – an Exhibition at One Canada Square, Canary Wharf.

Henry Moore enthusiasts could do worse on this rainy Easter Week than to head for Canary Wharf and see this exhibition, which tells the story of the creation of the Draped Seated Figure, now known as “Old Flo” (https://londongrip.co.uk/2017/12/old-flo-returns-to-the-east-end-of-london-by-jane-mcchrystal/), and her changing fortunes over the past fifty years.

There are some charming photos of Moore at work in his studio at Perry Green, Hertfordshire and a film of him directing Old Flo’s delivery by crane to the plinth on the Stifford Park Estate in 1963, which would become her home for the next thirty four years.  Viewers will note a startling contrast between cavalier attitudes towards health and safety demonstrated in the film by the artist and his team and the extreme caution employed by workers in their hard hats and hi-vis jackets photographed during the carefully orchestrated operation designed to deliver her to Cabot Square last October.

For me, however, the highlight of the exhibition was a study for Shelter Scene: Bunks and Sleepers.  Moore spent many evenings during the blitz observing East Enders as they sheltered from the bombs in the underground, before returning to Perry Green where he produced the series of moving drawings which became the inspiration for the Draped Seated Figure.  The shelter scene is one of those drawings, and the original study on show in Canada Square conveys a depth of compassion and admiration for the unfortunate shelterers, which can never be captured in any reproduction.

Other people I viewed the exhibition with were struck by the dynamism of a finely worked maquette, which formed part of the preparation for the final plaster figure to be cast in bronze, and left an impression that the figure might pull away from her seat and walk off at any moment.

I think anyone who visits Indomitable Spirit will have a far richer experience of this monument to the endurance of Londoners during the blitz, than can be gained from viewing her “cold” against the backdrop of Cabot Square and its elegant fountains.