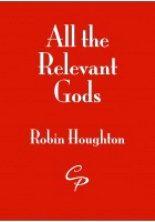 All the Relevant Gods was one of the winners of the 2017 Cinnamon Press pamphlet competition. Judge, Ian Gregson, praised the book for its ‘impressive range of reference’ and the way “its more abstract references” were grounded in “a vivid concreteness.”

We get a sense of a working life – in the footwear industry, a job that takes the speaker to far-flung places. ‘Handmade in Guangzhou’ vividly presents the conditions of such labour, “Past an open door big enough to drive in, / a soup of steamed up figures just visible inside …” where women workers are “pressed together in pairs, bowed / as if praying to the western god of sport & leisure.” Houghton illustrates well the gulf between two worlds: “We are the tall, pale Americans – curiosities, stalked / by stares.” It doesn’t really matter that all the visitors might not be American – Houghton herself, for example – for the Chinese workers, it is getting the job done that most matters. The separation between cultures is reinforced by mention of the “glass-walled cell”, on the one side of which the business people, “add two mils here, re-form mid-sole contours, laugh / at our own jokes”, while on the other, there is “the still-life of a break / rows of workers asleep at their stations”, missing lunch while the “Americans” have “pizza and Coke brought in”. The speaker “cannot make eye contact” despite trying to. The poem models throughout this inability to connect across cultural boundaries, a mismatch between what exhausted workers manufacture and the globalised ideal, “a token logo / greets us – hand-painted, not quite the right pantone.”

We can’t tell if Sagra in the pamphlet’s title poem is connected with the shoe industry; we can see that she is full of energy and passion and life, “Sagra’s office walls flare chilli and lime. / To enter is to firewalk…”, she is “whiplash of Carnival … / … more shout than song.” For the speaker, she represents escape, another life, contrasting with hers, “I’m as passive as the laptops around us” and she recognizes something of the goddess in Sagra, for which “her sly lump of an English boyfriend” should be thankful.

‘Four star’ presents a hotel room as a crime scene caught on film, “Somewhere a foot hangs numb, a slab of thigh pocked by bed crumbs / … Pan out …” There is a contrast between the dishevelled (and transient) luxury that accompanies these stopovers for work, “the fiction of what gets said in the lingua franca of Marriotts & Hiltons”, and the “blur-faced peasants” on the wall, who “haul in the harvest” and are voiceless witnesses to the scene in the room. There is a shift of pronouns in the second half of the poem, from ‘we’ to ‘I’, when the general experience becomes the personal one. When you go away so much for your job, a hotel can become home, “how easy to mistake colleagues for lovers / hotels for havens …” However we already know that the circumstances are uneasy, especially as the first line of the poem is, “I’m stuck to this spot like a leech drawing blood.” Disillusionment with the footwear industry is the subject of the 8 long-lined couplets of ‘She discovered the internet’. The poem is a litany of such disillusionment: “I stopped believing in sock liners and moulded footbeds. / I stopped believing / in my hard-copy life, in cushioning, in adiprene™ and in everything…” Houghton controls the tone of this poem well. I particularly relished the insider’s use of footwear terminology; the rueful insight that the “lead designer” was “three slips of the tongue away / from calling me the clueless marketing bitch I clearly was”, but also “looked older and smaller’. The poem shows how the scales can fall away from our eyes and the secret bliss in what might come next, “I guarded it like a cat guards a bird with one wing …”

There are poems of non work-related travel. In the opening poem, ‘Old ground’, Houghton evokes a region of Western Australia, known for its Aboriginal peoples and ancient landscapes, “So few highways they stand out like the heart / head and life lines of your hand.” Even though the identity of the ‘you’ is undisclosed, there is evident bonding over the map of the land, “We place the map flat, smooth a creased Pibara / follow with fingers the borderline dishonestly straight.” Throughout the poem, the land’s beauty, mystery and precariousness are compellingly evoked. The poem wears its politics lightly but the aboriginal struggle for land rights and continual erosion of their territories is at its heart: the map is re-folded, “… with each repeated abrasion / risking the loss of one more creek or baobab.” I liked the extended spacings in ‘First Salsa in Cusco’ which imitate both the slow steps in learning to dance and the disorientation felt in being at a high altitude: “ … her head / was lost luggage three thousand metres up stuck / in the navel of the world.”

I was entertained by ‘Performance’, after a piece by John Cage, “ – composer / of play nothing, suspend everything …” where you have to listen hard to what you can actually hear and where unintentional sounds, “Fricative chip of a cough, metallic snap stage left …” become freighted with possible meaning. The idea translates into life: into memory, what might have been said, or unsaid, “One unspoken and / hangs in the unreachable corner of the room / safe in the dust, needing no audience.”

Robin Houghton is a subtle poet: we recognise the places and circumstances of her poems yet, at the same time, she draws our attention consistently to what might be in “the unreachable corner of the room.”

Foot Wear is a hand-made pamphlet in a limited edition of 50 copies. In designing and making it, Robin Houghton saw scope for elaborating on the theme of ‘shoes’, not just relating to working in the shoe industry but also to the shoes of her childhood. “At thirteen / I go from boys’ shoes to platforms.” (‘Auntie’s feet’); those platforms make her “The tallest in the class. Taller.”

She explains on her blog: ‘I wanted this to be a small collection of poem ‘vignettes’, semi-autobiographical, related to my life in shoes, in limited edition.’ She wanted the pamphlets to be hand-made because ‘the trainers we wear are by and large handmade – from the pattern cutting to the stitching, dyeing, glueing and finishing – by hundreds of assembly-line workers in the far east, and it’s skilled work. The least I could do, to pay homage to that process, was to make the pamphlets myself.’ Each poem is accompanied by a photograph and the resulting pamphlet is a lovely item showing dedication both to poetry and the process of making. You can read the full blog post at http://robinhoughtonpoetry.co.uk/2017/11/15/foot-wear-a-handmade-mini-pamphlet/.