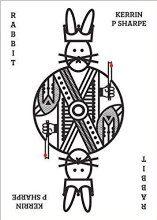 Kerrin P Sharpe’s poems consistently offers a new take on the world, observes Roger Caldwell; but at times they can also be agreeably baffling.

In the title poem of this, her third collection to date, Kerrin Sharpe relates how her “mother tamed a rabbit”. This is no straightforward reminiscence of childhood, however, but rapidly turns weird, even sinister. Why should her mother have had to insist that “his razor and strop / were restrained in the bathroom”? How is that “once she found blood on her towel”? In a poem entitled ‘the train kept my son breathing’ her son is enabled to “walk through an alphabet / of rabbits”. In another poem we are told that “a hunter / was eaten by a blanket / of rabbits”.

In fact, despite the title of this collection, hares easily outnumber rabbits – so much so that we are always coming across, or racing after, them. In ‘when we fly we are all homeless’ Lenin reincarnated as “a rough sleeper” reminds the narrator of “the doubling of a hare”. In ‘Stockholm’ “a hare runs / like her bones taught her”. In ‘teeth can be heroes’ we are helpfully informed that “the Tudors placed warm hare brains / on the gums of teething babies”. In ‘Polish for hare’, as a farmer holding a leveret talks of the nearby camp at Treblinka, “the hare’s breath slowed / right down like a train”. The hare we are surprised by in ‘surprised by hare’ is a very Irish one who “worse for wear /beyond compare// walked fair and square / through thoroughfare / with questionnaire // and silverware / from country fair / to County Clare”.

As these quotations suggest, Sharpe’s art is at some distance from that of narrative realism. There are clear autobiographical elements (her Irish and East European heritages figure prominently, as do members of her immediate family) and there are references to recent public events (the Christchurch earthquake, the downing of a passenger plane over Ukraine), but everything is seen a little aslant or from an unexpected angle, so that one never knows in advance on what a poem’s final line will alight. There are semantic links between poems: if there is a “sound drowned valley” in one poem there will be more such valleys in the next poem but one. The last line of one poem may become the title of the next. Priests and churches are common referents, as is the lexis of anatomy and neuroscience (Broca’s area, cerebrum). These are not so much poems standing alone on the page as parts of a wider picture of which we are offered only tantalizing glimpses.

Like other New Zealand poets, Sharpe aims for a surface simplicity, writing in a stripped-down style which is largely unpunctuated. This can occasionally present problems to the reader: one occasionally stumbles, not knowing whether a clause belongs to a sentence that has ended or one that has newly begun, a difficulty enhanced by the avoidance of connectives like “but”. (An occasional full stop would not come amiss, especially since question and exclamation marks don’t fall under the same total ban.) This is, grammatically, a poetry of statement, but we are so often unsure what the statements are saying that they might as well be questions. In ‘Francis, it’s time we talked about the double helix’ she clearly has a problem about DNA but it’s less clear (to me at least) quite what the problem is.

For the most part, however, her poems don’t so much unprofitably perplex as agreeably baffle. I don’t recognize her temple in Alaska which is full of butterflies. When she tells me that “an ambulance / has the same effect as a butterfly” I feel that I am in a riddle by Lewis Carroll. These are poems that sparkle with originality, and for all their obliquities reach surprisingly far – geographically, intellectually, and emotionally. More than most poets do, she consistently offers a new take on the world – one that, for all its wit and verve, is never without its moments of darkness. Here the poem ‘teeth can be heroes’ may be seen as representative: it closes with grotesque finality: